The Polish Prince: A True WWII Story of Being Sent to Labor Camps by Germans, Captured by Ukrainians, Bombed by the Allies, and Dodging R (Paperback) 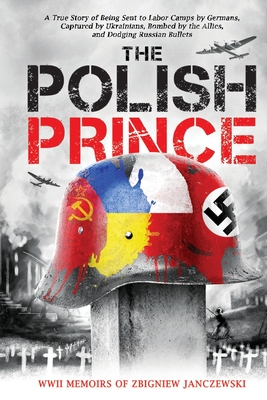 The Polish Prince: A True WWII Story of Being Sent to Labor Camps by Germans, Captured by Ukrainians, Bombed by the Allies, and Dodging R (Paperback)

By Zbigniew Janczewski (Memoir by)


..A must-read if you want to understand the 20th century background of the Russian invasion into Ukraine in 2022... In 1939, 13-year-old Zbigniew learns how to survive in eastern Poland when WWII breaks out. As the war progresses, he is caught between Nazi-German oppressors, the resisting Polish Home Army, the Ukrainian Insurgent Army, as well as Soviet guerilla, with bullets and bombs flying all around him. Through his memoirs, he tells the story of survival, being captured and sent to concentration camps, escaping, and of falling in love. It's an honest tale of the effects of war, which still resonate today in that part of the world, and a must-read if you want to understand the background of the geopolitical issues facing our world today.
Want to learn more about this story? Check out https: /thepolishprince.info
A Ukrainian illustrator created all of the maps in this book. At the time of making the illustrations, she lived in Kharkov, which in 2022, has been under constant shelling from the Russian Army. It was last taken over by the Russians in 1943. See her testimony below:
"...We lived in Kharkov. My house was on the outskirts of the city in the direction of the Russian Federation. On the morning of the 24th, we woke up from the fact that bomb explosions were heard around... and the windows were shaking. After days of bombing, with difficulty... and in despair, we left the city." -Victoriia RiabovaMay 2022
Also includes a Foreword by BARTOSZ GRODECKI, Polish Deputy Minister of the Interior:
"...Zbigniew (Zbyszek) Janczewski, growing up in the multicultural melting pot of the city of Rivne, now in Ukraine, was an eyewitness to the atrocities of war, losing many friends and loved ones in the process. His fate is a story of wandering through militarily occupied territories, while developing interpersonal and international relationships on both sides of the equation, escaping death on many accounts. Along the way, he endures a wide variety of emotions caused by objective events and the experience of war. Unfortunately, it is a story that will be retold, in many of its elements, by current sufferers of Russian aggression..."-Bartosz Grodecki April 24, 2022