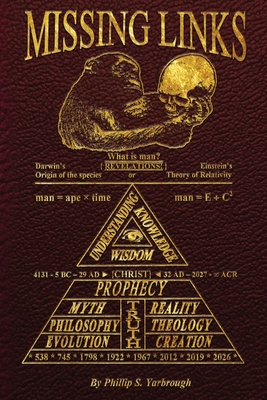 Is man the product of evolution or the dividend of creation? Both are classified as theory, but one is taught as factual, yet the other is forbidden in public schools, thanks to the relentless eff orts of the pro freedom of choice ACLU. The term evolutionary design is now used in science. Doesn't the term design inherently require a designer, which must have intelligence?

"To the time of the end, many shall run to and fro, and knowledge shall be increased." (Dan. 12:4) Man has greatly increased his scientific knowledge in the last few hundred years. The missing link in the understanding of that knowledge is having the wisdom to use it. Can science prove creation? Can we separate scientifically sound biblical fact from non-biblical philosophical theology? What are the doctrines and traditions of men? (Matt. 15:9)

Einstein's theory of relativity, E = mc , the big bang, earth as a ball of comic dust, and the Great Pyramids are found in the Bible. Can the myth of The Lost City of Atlantis be explained? Biblical timeline prophecies date to 1798, 1922, 1967, and 2012. (Old Testament) Genesis and Revelation adds two seven-year periods: 2019 and 2026. The beast, its mark, its number, and the harlot are also historically identified. Who are the harlot's daughters? (Rev. 17:1-6)

The missing links in evolution, creation, and understanding prophecy are found in the knowledge of biology, physics, math and history. Missing Links is a little book that is sweetly revealing but may be bitter to digest. (Rev. 10)

Since the winter of 2019/2020 the United States, Great Britain, Western Europe (The Lost Ten Tribes of Israel), and the rest of the world have been smitten with COVID-19. Where did it come from? Why is it happening?

We are currently in the last days (years) of this earth age. Are we in the final Revelation countdown? This is only the beginning of sorrows The white horse in Rev. 6:1 is currently riding and is gaining speed daily. Who is its rider? (Ezek. 38:10-16) The red horse will begin his ride in 2020/2021. Who will be its rider? Could our third world war be just over the horizon? World War II got us out of the last Great Depression. We are not far from another one now

It is time that we dust off the best-selling book since the invention of the printing press and seriously read it with a contrite and humble spirit (Isaiah 56-58) Those who know the Lord cannot know the day or the hour of his coming, but they can know the season. (Matt. 24:32-38, Rev. 6:13)