Preserving the Truth: The Church without a Name and Its Founder, William Irvine (Paperback) 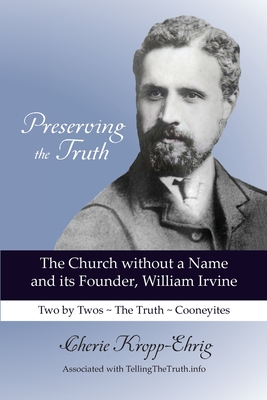 Preserving the Truth: The Church without a Name and Its Founder, William Irvine (Paperback)

At the turn of the twentieth century, William Irvine, a Scotsman, embarked on an experiment to restore the first century primitive New Testament ministry and church, using Matthew 10 as his model. The revolutionary movement caught on rapidly in the British Isles. Irvine's charismatic preaching inspired hundreds of young men and women to become itinerant, celibate, homeless missionaries traveling in pairs (2 by 2), sustained only by faith, freely spreading the nameless sect worldwide. Followers worshipped only in private homes.

Two fundamental beliefs of the Church without a Name: The church in the home and the preacher without a home. (John "Jack" T. Carroll)

In 1914, Irvine's senior staff rebelled and expelled him. They did the same in 1928 to his right-hand man, Edward Cooney. After expunging their names, roles and actions from the sect's history, they claimed Jesus was their only founder.

Although this church purposely takes no name and has a large global following, few have heard of it. Common nicknames are "Two by Twos" (2x2s) and "The Truth." Many members are unaware of its true history and banished founder.

Determined to trace the origin of this sect, Cherie Kropp-Ehrig traveled to the UK in 2004 and 2014 where she discovered its deeply buried roots in Ireland. She unearthed many historical documents, including newspaper articles, accounts, journals, court cases, photographs, letters, testimonials, family trees, etc.