THE HOUR That Changes Everything: America's Role in Bible Prophecy (Paperback) 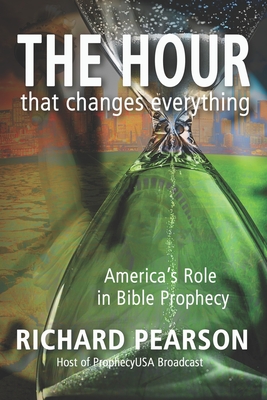 THE HOUR That Changes Everything: America's Role in Bible Prophecy (Paperback)


Not On Our Shelves—Ships in 1-5 Days
(This book cannot be returned.)
UNVEILING THE HIDDEN MYSTERY OF AMERICA'S ROLE IN BIBLE PROPHECY
The last book in the Bible called Revelation speaks of the end times. It confirms what Old Testament prophets foretold concerning nations that would rise. One country plays a pivotal role in fulfilling Bible prophecy and has 53 biblical descriptions. The United States of America meets every description. The Old Testament Prophet Daniel was told to shut the book for it was not for him to know the mystery, but in the latter days, the wise would understand. Get ready to receive a prophetic insight that no other generation has been given. In this new book, The Hour That Changes Everything, Richard Pearson will take us through the Bible, highlighting God's plan for America's current and future role in the End Times. Something is indeed happening, and Richard Pearson digs deeply into the Bible to help you understand biblical prophecy from a refreshingly new perspective. With each chapter, you do not only learn more about prophecy, but you'll also clearly discover hidden mysteries pointing to the United States' role in it. IT WILL COME IN ONE HOUR
While the Bible has plenty to say about the End Times, The Hour That Changes Everything will uncover the most incredible "time sequence " in human history. In that one hour, an incredible cataclysmic change will cover the world pivoting around The USA. But at the same time, even as the hour brings judgment, Richard Pearson details how the God who delivered Shadrach, Meshach, and Abednego from Babylon's fiery furnace, will once again manifest His presence in our generation and miraculously open a door for our escape.

Richard Pearson founded Richard Pearson Ministries while serving for twenty-one years on the executive board of Oral Roberts University. Retired now as CEO of several Canadian transportation companies, He and his wife, Karen, reside in Canada.