Charles Babbage and Alan Turing: The Lives and Careers of the English Mathematicians Who Revolutionized Modern Computer Science (Paperback) 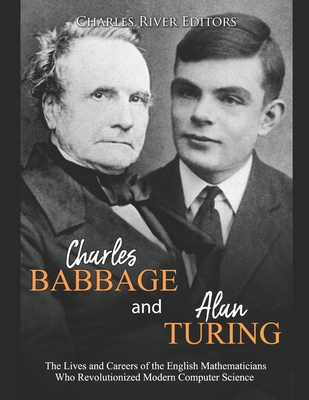 Charles Babbage and Alan Turing: The Lives and Careers of the English Mathematicians Who Revolutionized Modern Computer Science (Paperback)


Not On Our Shelves—Ships in 1-5 Days
(This book cannot be returned.)
*Includes pictures
*Includes a bibliography for further reading
Today, the world is in the midst of the transformative and ever-developing Digital Age, otherwise referred to as the "Age of Information." It has been an unprecedented, remarkable, and explosive era marked by social media and computer-generated imagery (and with it, deep fakes), among other novel, previously unimaginable concepts. The bulky monitors and blocky towers of personal computers and laptops, which were once upon a time considered fashionable, futuristic contraptions, have since been replaced with a sleek and stylish array - both multi-functional and specialized - of aerodynamic, minimalistic devices, ranging from smartphones and tablets to lightweight laptops and full-fledged gaming set-ups packed with powerhouse processors.
While many are familiar with those facts, and a recent movie revived interest in Alan Turing's achievements with computing during World War II, it was Charles Babbage who was the first to conceive the notion of a programmable and automatic universal computer, which, on top of its ability to calculate any mathematical equation at an unmatched speed, could also be used for a seemingly infinite number of other applications. In other words, he envisioned the precursor to the modern computer.
At first blush, Babbage hardly seemed the type, because in many ways, Babbage was the antithesis of the debonair, silver-tongued, and effortlessly charismatic CEOs of present-day tech giants. Babbage was a quirky individual to say the least. He was highly observant, but was in the same breath a habitual daydreamer, often caught in a trance of deep thought. He spoke with a stutter, cared little about his appearance, often sporting stained collars and rumpled coats, and in his later years became something of an agoraphobe, developing a disdain for crowds and music. In 1930, the West was still freshly reeling from the cataclysmic stock market crash previous October, and British Prime Minister Ramsay MacDonald was struggling himself to prevail over a reality that is as irremediable as it is inextricable: preserving the Gold Standard and providing adequate aid to the poor and unemployed, the latter of which there were reportedly two million of by year's end.
It was amidst this bleak atmosphere that a peerlessly profound young mind in South West England first envisioned a concept so momentous that it ultimately led to the creation of what is now considered the world's first computer. This young man was none other than Alan Turing, who was far from the suave, pipe-puffing dandy that many might associate with such a grand and futuristic idea. At the same time, Turing was hardly the kind of two-dimensional, stereotypically bookish character whose light bulb suddenly went off during an experiment binge either. On the contrary, Alan was a gauche and grief-stricken 17-year-old schoolboy who would channel all the pain and confusion from his poignant heartbreak into his tireless research, paving the path for the deeply transformative Computer Age.
Charles Babbage and Alan Turing: The Lives and Careers of the English Mathematicians Who Revolutionized Modern Computer Science chronicles both polymaths' stories and their impact on computing. Along with pictures depicting important people, places, and events, you will learn about Charles Babbage and Alan Turing like never before.