Richest and Poorest Country Congo: A Story of Greed, Terror, and Heroism in Colonial Africa (Paperback) 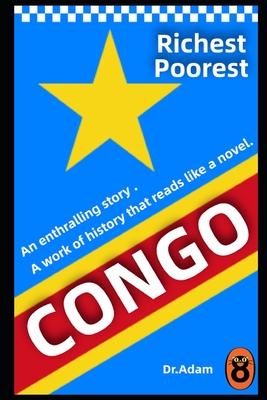 Richest and Poorest Country Congo: A Story of Greed, Terror, and Heroism in Colonial Africa (Paperback)


Backordered
(This book cannot be returned.)
Every Black must be read this book and reread.
An enthralling story . A work of history that reads like a novel.
The great Congo scandal prefigured our own times . . .
Is Congo the richest country in the world?
The Democratic Republic of Congo is widely considered to be the richest country in the world regarding natural resources; its untapped deposits of raw minerals are estimated to be worth in excess of U.S. $24 trillion. Why is Congo so poor?
Poverty in Congo is vast and covers all areas of the country. This is mostly because the civil war displaced over one-third of the population. The return of natives to a weakened Congo led to many facing poverty and disease from poor infrastructure and government. Dr.Adam takes us through several hundred years of history, bringing some of the most dramatic episodes in Congolese history. Here are the people and events that have impinged the Congo's development-from the slave trade to the ivory and rubber booms; from the arrival of Henry Morton Stanley to the tragic regime of King Leopold II; from global indignation to Belgian colonialism; from the struggle for independence to Mobutu's brutal rule; and from the world famous Rumble in the Jungle to the civil war over natural resources that began in 1996 and still rages today.