Crazy for the Storm: A Memoir of Survival (Compact Disc) 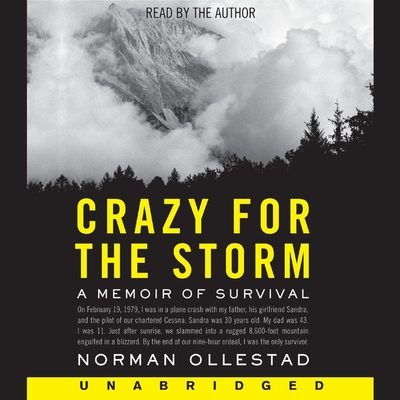 Crazy for the Storm: A Memoir of Survival (Compact Disc)

“Norman Ollstad's memoir of surviving a plane crash, in a howling winter storm high on the side of Ontario Peak in Southern California, is not merely a gripping story of an 11-year old boy's survival, but the bitter tale of a son's struggling to comprehend his father's death, the heroic story of his efforts, ultimately futile, to save his father's injured girl friend, and the saga of his wildly improbably descent of the mountain under horrendous conditions through astonishing presence of mind and perseverance. Greatly enriching this fascinating and well written account of survival are alternating chapters describing young Norman's complicated and confusing life growing up with his divorced mother and her live-in boyfriend on Topanga Beach, and his love-hate relationship with his proud and demanding father who, on skiing and surfing adventures in California and Mexico, constantly pushes him to--and sometimes beyond--the limits of his young physical and mental abilities. Struggling with post-survival guilt and the confusion of early adolescence, Norman comes to realize that it was the adversity his father made him confront that gave him the skills with which he survive his ordeal. The story's final challenge comes on a skiing trip to Mammoth Mountain, where his own father often took him as a boy, when the now grown Norman must confront the hopes he has for his own son, and decide how close to push him towards that thin line between safety and danger where lessons are learned. IN SUMMARY: Written in simple, almost matter-of-fact, but elegant prose, Crazy for the Storm is a coming-of-age story like you've never read, full of tragedy, beauty, struggle, adventure, and life-lessons--highly recommended for both adults and young adults, especially fathers and sons.”
— Gary Colliver, Windows on the World-Books & Art, Mariposa, CA

“Crazy for the Storm is a riveting account of survival. Norman Ollestad weaves the story of his unconventional early childhood and the details of a horrible airplane crash into a brilliant tribute to his adventurous father.”
— Jamie Robinson, Bestsellers Books & Coffee Co., Mason, MI

Dad SaidOllestad, we can do it all. . . .Why do you make me do this?Because it's beautiful when it all comes together.I don't think it's ever beautiful.One day.Never.We'll see, my father said. Vamanos.From the age of three, Norman Ollestad was thrust into the world of surfing and competitive downhill skiing by the intense, charismatic father he both idolized and resented. While his friends were riding bikes, playing ball, and going to birthday parties, young Norman was whisked away in pursuit of wild and demanding adventures. Yet it were these exhilarating tests of skill that prepared "Boy Wonder," as his father called him, to become a fearless champion--and ultimately saved his life.Flying to a ski championship ceremony in February 1979, the chartered Cessna carrying Norman, his father, his father's girlfriend, and the pilot crashed into the San Gabriel Mountains and was suspended at 8,200 feet, engulfed in a blizzard. "Dad and I were a team, and he was Superman," Ollestad writes. But now Norman's father was dead, and the devastated eleven-year-old had to descend the treacherous, icy mountain alone.Set amid the spontaneous, uninhibited surf culture of Malibu and Mexico in the late 1970s, this riveting memoir, written in crisp Hemingwayesque prose, recalls Ollestad's childhood and the magnetic man whose determination and love infuriated and inspired him--and also taught him to overcome the indomitable. As it illuminates the complicated bond between an extraordinary father and his son, Ollestad's powerful and unforgettable true story offers remarkable insight for us all.