Enemy of the People Lib/E: The Munich Post and the Journalists Who Opposed Hitler (Compact Disc) 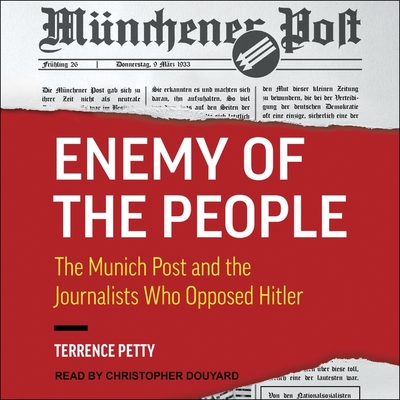 Enemy of the People Lib/E: The Munich Post and the Journalists Who Opposed Hitler (Compact Disc)


Special Order—Subject to Availability
A stirring true story of the journalists who dared to oppose Hitler--and the campaign waged against them. After serving in the First World War, Adolf Hitler encountered a serious obstacle to his plotting for power when the Munich Post, drawing on sources within the Nazi Party, began tracking the corruption and dark dreams of his inner circle. With leaked documents from Hitler's political rivals, who were shocked by his violent rhetoric and fearing the worst, the Post battled Hitler for ownership of the truth. After starting with libel lawsuits and anti-press propaganda and proceeding to assaults on editors at the Post, the Nazis finally resorted to raiding the paper's offices, shutting production down, and rounding up the staff. Enemy of the People brilliantly captures the dangerous times of Germany's Weimar era and the courage of the free press--people driven to speak louder than the enemy himself.