If Anyone Calls, Tell Them I Died: A Memoir (Paperback) 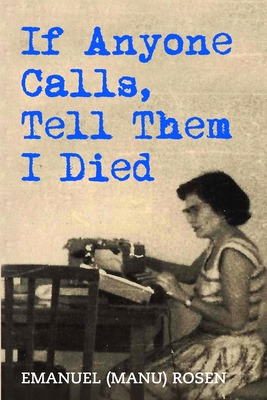 If Anyone Calls, Tell Them I Died: A Memoir (Paperback)

The Holocaust and its aftermath were not often discussed in families of second-generation survivors. In Tel Aviv of the 1960s, Emanuel Rosen grew up hearing the staccato of his mother's typewriter, but had no idea about the battle she was fighting. This changed years later, when he found a box with letters that his grandparents had sent from a tragic 1956 trip to Germany and he decided to retrace their journey.

This book braids the stories of three generations-grandparents, daughter, and grandson. The grandparents, the lawyer Dr. Hugo Mendel and his wife Lucie, who were respected German citizens until the Nazis took away their livelihood and their dignity. Their daughter, Mirjam, who had fought for years to prove that those who forced her father out of his profession were responsible for his death. And their grandson, Emanuel, who discovered a shocking truth.

This true story demonstrates the devastating consequences of Nazi persecution, even for survivors who fled Europe before WWII and did not experience the horrors of the Holocaust. It is also a stark reminder of the heavy psychological toll of uprooting, still experienced by refugees and exiles today. Written in a personal style brimming with love and wit, If Anyone Calls, Tell Them I Died is a story of loss, strength, and triumph.