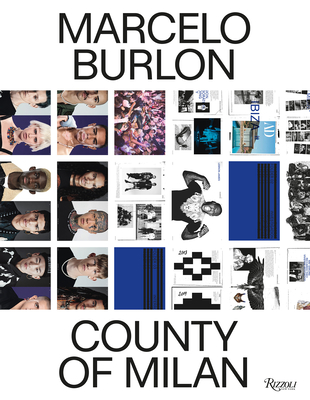 By Angelo Flaccavento (Text by)

Marcelo Burlon is the driving force and originator behind County of Milan. He is a trailblazer who moves across milieus and disciplines with remarkable ease, embodying that defining contemporary quality: liquidity. Averse to cultural and geographic borders, Burlon is first and foremost a polymath: a much sought-after party organizer, DJ, designer, photographer, nightlife wizard, and general aggregator. Invention, for Burlon, is in the mix.

His biography provides the background to this fluid vision. Marcelo Burlon, in fact, has been immersed in a culturally varied milieu from day one, having been raised in El Bolsón, Argentina, where the first hippies merged with gauchos. Transplanted to Italy while barely a teenager, he made his way into nightlife, then took over Milan to conquer the world.
The endeavor started with a bunch of t-shirts in 2012, but a complete collection quickly ensued, turning into both a social and commercial phenomenon. Its inclusive message got the fire started: County of Milan is all about embracing and celebrating diversity, as the brand's highly spectacular, intensely emotional shows testify.

This illustrated book follows the structure of a police investigation report, with a suspect, interrogations, evidence, accomplice profiles, and an affidavit describing Marcelo's biography, brand, tribe and creations.
Angelo Flaccavento is one of Italy's most successful fashion journalists. He regularly works as a contributing editor for numerous media outlets including GQ Italia and the German and Russian editions of GQ Style. He is also a contributing editor to The Business of Fashion.