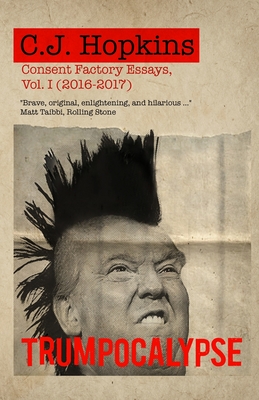 In this first collection of his Consent Factory essays, C. J. Hopkins irreverently covers the improbable rise of Donald Trump, the political dynamics that led to his presidency, and the media-generated mass hysteria that swept America during his first term in office.

In this time of extreme political polarization and enforced conformity on both the Left and the Right, Hopkins' political satire and commentary presents a refreshingly unorthodox analysis of the forces at play in the world today -- global capitalism, neo-nationalism, populism, neo-fascism, etc. -- and cuts through the official propaganda, sensationalism, and disinformation that often passes for mainstream news.

Featuring popular Hopkins essays like Why Ridiculous Propaganda Still Works, Tomorrow Belongs to the Corporatocracy, and The Year of the Headless Liberal Chicken, Trumpocalypse is a disturbing yet uproarious portrait of the Western establishment's panic over the election of an unauthorized president.