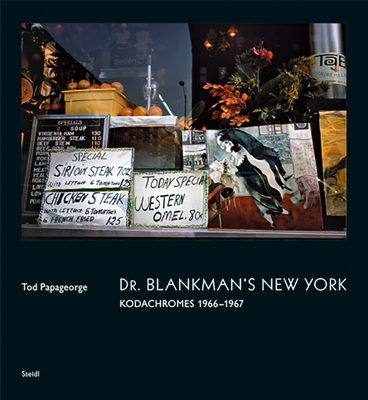 Tod Papageorge (born 1940) produced the photographs for Dr. Blankman's New York in 1966-67, on the heels of moving into the city. Photographer friends persuaded him that he could help pay the rent by landing some magazine assignments, and that a carousel tray of slides would be the best way of convincing art directors to take a chance on him. So, often after spending a day in the streets photographing in black and white, he would put a roll of Kodachrome film in his camera on his walk home and make color pictures, in many cases of shop windows.
This reissue of Dr. Blankman's New York, first published by Steidl in 2017, has enlarged the size of the plates and, with one exception, condensed the original design to a series of double spreads, intensifying the sense that what Papageorge was doing in these photographs was elaborating, on a parallel track, the portrayal of Manhattan presented in the black-and-white work of Down to the City, the first volume of his War and Peace in New York (also published by Steidl).