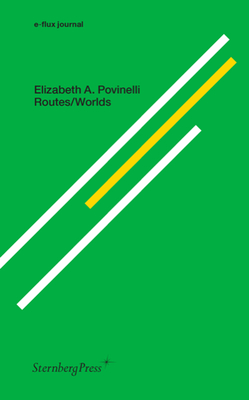 By Elizabeth A. Povinelli


Coming Soon—Pre-Order Now
An anthropology of the otherwise considers forms of life that run counter to dominant modes of being under late settler liberalism.

Elizabeth A. Povinelli maps the creation and dismantling of worlds formed by the twinning of historical progress and settler colonialism—as a unity in events and a contradiction in ideology. Even if corporations and nation-states now collude in the same Ponzi schemes, they still continue to transform space and time. At the receiving end of the ideological exhaust pipe, where transformation is inherited as deformation, the diagram flips to place brutality and existential exhaustion at the beginning. But the beginning of what? How about a new beginning, starting with modes of survival and persistence against, and within, a world built from deferred promises? This is a world that many in the imperial hemisphere are only starting to realize they’ve known for longer than they want to admit.

Routes/Worlds rearticulates large-scale systems of power and affect, even as—or precisely because—those systems stage increasingly novel forms of neglect. Today, it only becomes clearer that struggles to survive day-to-day challenges are most often struggles against sedimented raw deals whose disastrous logic needs to be traced over large expanses of space and time to become perceptible. In this constant struggle, Povinelli provides weapons as well as inspiration.
Elizabeth Povinelli is a critical theorist and filmmaker. Her work spans five books, numerous essays, and thirty-five years of collaboration with her Indigenous colleagues in north Australia including, most recently, six films they have created as members of the Karrabing Film Collective.