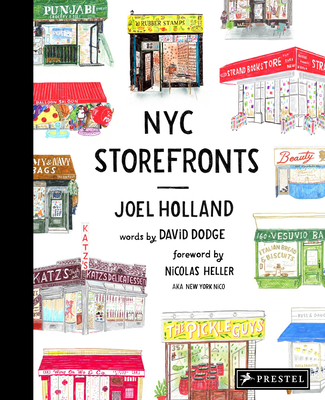 
On Our Shelves Now at:
This whimsical love letter to the Big Apple’s most cherished and intriguing shops is a timeless celebration of New York’s diversity, energy, resilience, and weirdness.

Every New Yorker has a favorite place to shop—whether it’s for pizza or flowers, to grab a beer, or slurp down soup dumplings.

When the coronavirus crisis hit in 2020, illustrator Joel Holland began drawing storefronts near his apartment as a way of memorializing an element of city life that seemed suddenly precarious. He posted them on Instagram and they quickly drew an avid following. Eventually, Holland’s collection grew to include shops recommended by friends or strangers online.

This book showcases 225 of his delightful illustrations and runs the gamut, from delis and bodegas to dive bars, bookstores, bakeries, newsstands, cafés, restaurants and more. Each image is paired with engaging text written by journalist David Dodge and filled with the historical, cultural, and architectural details that have earned these stores a place in people’s hearts. Also included is a foreword by beloved Instagrammer New York Nico, who is known for chronicling the city’s independent businesses.

The perfect gift for New Yorkers of all ages—as well as an insider’s guide to everything from dim sum to late-night jazz—this treasury of iconic shops belongs in the library of anyone who loves NYC.
DAVID DODGE is a freelance writer living in New York City who covers travel, LGBTQ+ issues, politics, and culture for outlets including the New York Times, Travel + Leisure, The Advocate, Out, and HuffPost. He is the co-author of Prestel’s 2021 book Sassy Planet.

JOEL HOLLAND is an illustrator who has lived in New York City for over twenty years. His work has graced the New York Times, The New Yorker, New York magazine, Apple store windows across the world, and numerous book covers.

NICOLAS HELLER (aka New York Nico) is a filmmaker who was born and raised in NYC. He uses his popular Instagram account (@newyorknico) to highlight charismatic citizens, including local business owners.