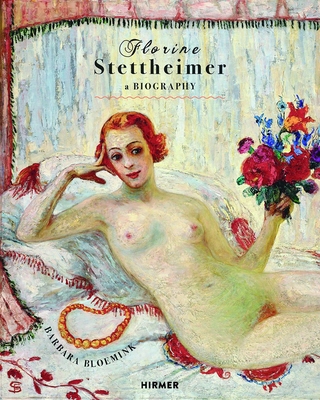 
Coming Soon—Pre-Order Now
This comprehensive biography establishes Florine Stettheimer as one of the most innovative artists of the early twentieth century.

Florine Stettheimer was a feminist, multi-media artist who documented New York City’s growth as the center of cultural life, finance, and entertainment between the World Wars. During her first forty years, spent mostly in Europe, Florine Stettheimer studied academic painting and was aware of the earliest modernist styles prior to most American artists. Returning to New York, she and her sisters led an acclaimed salon for major avant-garde cultural figures including Marcel Duchamp, the Stieglitz circle, and numerous poets, dancers, and writers. During her life, Stettheimer showed her innovative paintings in more than forty of the most important museum exhibits and salons. She also wrote poetry, designed unique furniture, and gained international fame for the sets and costumes she created for the avant-garde opera, Four Saints in Three Acts. Stettheimer’s work was also socially progressive: she painted several identity-issue paintings, addressing African American segregation, Jewish bigotry, fluid sexuality, and women’s new independence.

This biography presents one of the first comprehensive readings of Stettheimer’s art. Barbara Bloemink establishes Stettheimer’s place as one of the twentieth century’s most significant and progressive artists and examines why her unique work remains relevant today.

Barbara Bloemink is an expert on Florine Stettheimer’s work. She has written extensively on Stettheimer and co-curated the artist’s 1995 Whitney Museum Retrospective. Formerly the director and chief curator of five art museums, including the Smithsonian’s National Design Museum and the Guggenheim Hermitage Museum, Bloemink has curated over seventy exhibitions, published extensively, and lectured and taught internationally on art and design.
“For anyone interested in the messy, exhilarating tale of early American modernism, this is essential reading. Bloemink’s new biography provides an intimate, nuanced look at the pivotal role Stettheimer played in fomenting an artistic revolution in the United States. It is the definitive account of one of the era’s great artists.”
— Andrew Russeth

"Those of us who love the work of Florine Stettheimer owe a debt to Barbara Bloemink. . . . She has written a new biography, deeply researched and beautifully illustrated, with much to recommend it."
— Wall Street Journal

"The first extensive and scholarly biography of the artist. Stettheimer turns out to have been surprisingly shrewd in her judgments of others and self-reflective about her talents and motives. Her faux-naïf, fluorescent style has been regarded as a fountain of exuberance from a semi-trained, instinctive artist; in truth, she was a highly trained draftsman who could turn a torso with the best of the academics. One particular gift of Bloemink’s biography is that it presents the vers-libre poetry that Stettheimer wrote alongside her paintings, and shows that her verse, though produced without the immense technical care that she poured into her visual art, is in its way just as remarkable."
— The New Yorker

"Bloemink produced one of the first definitive biographies, The Life and Art of Florine Stettheimer (1995). Now, with Florine Stettheimer: A Biography, Bloemink updates, corrects, and expands her previous opus. . . . Her writing is suffused with the joie de vivre often attributed to her subject matter."
— Bookforum

"Bloemink is again making the case for Stettheimer as a fascinating, and crucial, figure of art history, one deserving a place in the pantheon of American modernists. In a hefty new biography, Stettheimer’s life and work—which, in addition to her paintings, include acerbic poems, ornate furniture and frames, and costumes and set designs—unfold in unprecedented detail."
— Vogue

“A 1963 biography of the painter Florine Stettheimer contributed greatly to the impression that she was a 'cloistered spinster' whose work was too frivolously ornamental to be taken seriously or regularly exhibited. Bloemink’s newly published biography serves as a necessary corrective: For starters, the artist was a dedicated feminist who actually enjoyed single life. The writer also excavates Stettheimer’s impact as a progressive thinker whose paintings challenged the societal norms of racism and antisemitism, and highlights the monumentality of her work, both in terms of its scale and its grand themes such as American patriotism and women’s independence.”
— T, The New York Times Style Magazine

"Enlightening. . . . In this comprehensive study of the artist’s life and work, Stettheimer scholar Barbara Bloemink expands on her 1995 biography, championing the painter’s contributions to Modern art as original and feminist. Bloemink argues that her work has been read superficially until now. She elucidates the historic context for Stettheimer’s paintings, aiding readers to look beyond the seductively decorative surfaces to see subversive depths. "
— The Art Newspaper

"[A] thrilling new book. . . Bloemink expresses a desire early on to undo a number of the 'misrepresentations' put forward about the artist."
— ARTnews

"Bloemink’s thorough, engaging book is the first comprehensive biography and full reading of Stettheimer’s paintings, and gives the artist the attention she has long deserved. The author explores the ways that Stettheimer’s life circumstances and social circle shaped her highly original art, which blended sly humor and private pleasures with socially and politically minded messages about the world at large."
— Hyperallergic

"[Stettheimer] has remained an artist’s artist, with an elusive legacy that Barbara Bloemink has uncovered in her new biography."
— AnOther Magazine

"Since her death in 1944, Florine Stettheimer has been celebrated, ignored, and rediscovered more than once. . . . A vast and handsome new biography by Barbara Bloemink, a longtime Stettheimer scholar, should at last put an end to such dithering. . . . The success of Bloemink’s book lies in the way she weaves together biographical information with close analyses of the work to answer that question. It is riveting reading, some of it quite amusing."
— The Magazine Antiques

"Stettheimer’s work, like her personal life, has suffered from a dearth of rigorous, good-faith appraisals, and because it isn’t easily lumped in with the era’s major movements, it was written off as lovely but ultimately unclassifiable and therefore a blip in art history. Barbara Bloemink’s new biography, The Life and Art of Florine Stettheimer, rectifies this by engaging with the work on its own terms, rather than by stretching it to fit prefabricated discourses on American modern art."
— The Nation

“Revises the previous profile of Stettheimer as a ‘cloistered spinster’ or an ‘eccentric maiden aunt.’ . . . Bloemink’s stress on Stettheimer’s formal training shores up her position that she was no naïve.”
— The Gay & Lesbian Review