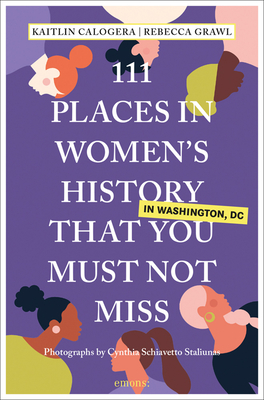 
In Stock—Click for Locations
- The ultimate insider's guide to women's history in Washington, DC for locals and experienced travelers- Features interesting and unusual places not found in traditional travel guides- Part of the international 111 Places/111 Shops series with over 650 titles and 3.8 million copies in print worldwide- Appeals to both the local market (more than 6.2 million people call Washington DC home) and the tourist market (more than 23 million people visit Washington, DC every year )- Fully illustrated with 111 full-page color photographsWomen's history is everywhere in Washington, if curious locals and adventurous tourists know where to look. As the District of Columbia evolved into one of the world's top tourist destinations, women emerged as pioneers and a town created to house the federal government matured into a gilded city affluent in feminist culture. Historic houses, hidden alleyways, and neighborhood parks stand as memorials to America's founding mothers who built the nation's capital. This book records the legacies of these women and encourages readers to explore their names on headstones, street signs, and buildings, while also discovering where hidden history is unmarked. Rising from a strong foundation, modern DC women have continued to nurture the legacy of their foremothers as chefs, artists, athletes, philanthropists, politicians, and entrepreneurs. Most notable are the stories of collaboration in which these women flout the myth that nothing gets accomplished in Washington. Feminism in the city is fueled by the creativity, leadership, and fortitude of local women, each with a personal experience that is uniquely special. While no story is the same, the themes of preservation and progress are weaved throughout this book as a reminder; her story is history and it is still being written.
Kaitlin Calogera embarked on a journey of entrepreneurship when she launched A Tour Of Her Own, the first tourism company in Washington, DC to focus exclusively on women's history. As a licensed tour guide, she recognized a lack of women's stories being represented in public spaces so she mobilized her community to reframe the traditional narrative through special events and historical tours. With a degree in History and a background coaching women's athletics, Kaitlin believes in the power of tourism to promote gender equality and education beyond the classroom. Rebecca Grawl is a professional DC tour guide with more than a decade's experience in public history, museum education, and tourism and is particularly proud of her involvement as a founding member of A Tour of Her Own, the first tour company in DC to focus exclusively on women's history. She is a proud graduate of Randolph-Macon Woman's College, member of the National Society Daughters of the American Revolution as well as an alumnae and senior leader with the National Society Children of the American Revolution. Rebecca can be seen on Mysteries at the Museum on the Travel Channel, heard on the Tour Guide Tell All podcast, and has been featured in local press outlets such as WAMU/DCist, Washingtonian, Washington City Paper, and more.