The Call of the Cranes: Expeditions Into a Mysterious World (Paperback) 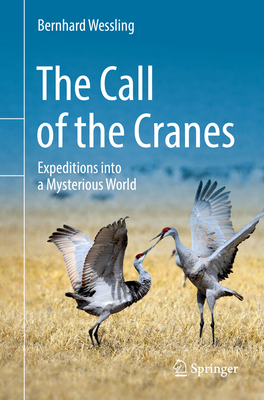 The Call of the Cranes: Expeditions Into a Mysterious World (Paperback)


On Our Shelves Now at:
Cranes are enigmatic birds. Only very little is known about the behaviour of these graceful dancers. The renowned naturalist and crane expert Bernhard Wessling takes us on exciting and adventurous expeditions into their hidden world and gets to the bottom of the myths surrounding these birds of happiness. With the help of a specially developed bioacoustic method, Dr. Wessling studied Eurasian, Red-Crowned, Sandhill and Whooping Cranes, all in the wild. He has researched their intelligence, social dynamics and communication and engaged in their protection. Impressively illustrated and lively narrated, this book presents his findings on their individually unique lives and relationships, their ability to adapt and solve problems, and their emotions. His observations allow us to delve deeply into the cranes' way of life and consciousness, often demonstrating the surprising similarities between humans and animals. An amazing work about the spirit of discovery, humility and respect for nature in the tradition of Alexander von Humboldt.
Cranes are among the most captivating birds on this planet. Dr. Wessling knows these birds, has accumulated a lifetime of observations on them, and has thought deeply about their abilities. In this book, he seeks to overturn old ideas about how these birds live, communicate, and think. His revelations surprise and delight and shed new light on an ancient avian family. Jennifer Ackerman, author of the New York Times bestseller The Genius of Birds and The Bird Way
The Call of the Cranes is a mesmerizing, vivid, lyrical and revelatory book. It truly is a spectacular book and a treasure Sy Montgomery, naturalist and author of 31 books (incl. the New York Times bestseller The Soul of an Octopus: A Surprising Exploration into the Wonder of Consciousness)
In this book, Bernhard Wessling shares his fascinating stories about cranes through patient observations and thoughtful conclusions. George Archibald, Co-Founder of the International Crane Foundation, Senior Conservationist
Dr. Wessling was born on December 15, 1951, studied chemistry and biology and received his doctorate degree in chemistry of natural products in 1977. After university, he worked as a researcher, chemist and entrepreneur developing and marketing new technologies, including more than 13 years in China. It is certainly unusual that he worked part-time (at his own expense) for decades in crane conservation and as an international recognised creative crane researcher.His research began not far from where he lived and worked near Hamburg. He was in charge of the crane protection in Hamburg's Duvenstedter nature preserve and the neighbouring Hansdorfer nature preserve, which belongs to Schleswig-Holstein. In both areas, he was an honorary nature conservation officer approved by the nature conservation authorities. More and more his work shifted to crane research, for which he developed a new method: sonagraphy, the analysis of the frequency spectrum of crane voices, which enables individual identification without banding. He also more and more carried out this research in other areas in Germany and finally in Asia and North America. He became a worldwide sought-after specialist in sonagraphy not only for cranes. He was the only foreigner to actively participate in a key position in the world's largest and still ongoing project to release young whooping cranes reared in captivity in isolation, which were shown the way south to their wintering grounds by ultralight aircrafts, for which he developed the crucial communication technology.In his main profession he also worked in a very unusual way - he not only worked as an industrial chemist and entrepreneur in his medium-sized company, but also successfully carried out basic scientific research. The web pages at www.bernhard-wessling.com allow you to find more information about this (e.g. in which fields he did research and which scientific and technological breakthroughs he achieved), including all scientific and technical publications and his publications concerning crane research.