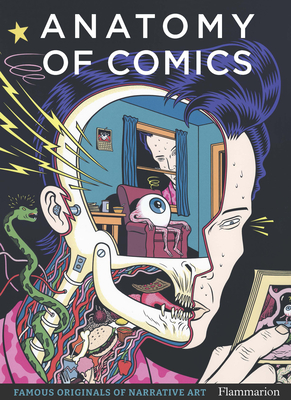 
On Our Shelves Now at:
An illustrated history of the most important and exceptional comics of the past 150 years.

This comprehensive history of the world’s best comics art includes masterpieces by cartoonists from Richard Felton Outcault in 1896 to Chris Ware today. These comics—populated by meta-humans, hybrids, and superheroes—present imagined fantastical worlds that have attracted generations of devoted fans.

A critical reference, this book is also a celebration of the characters who have accompanied readers from their first forays into reading through adolescence, and on into adulthood—from Tarzan to Tintin, Little Nemo to Betty Boop, the Fantastic Four to Batman, the Silver Surfer to Sin City, or the underground comics of Robert Crumb. A motley crew of characters—spandex-wrapped heroes with impossible muscles, hard-boiled detectives in soft hats, emancipated vamps, space-opera acrobats in chain-mail underpants, zombies, and scrawny underground freaks—span all genres of this international art form. Featuring important American and European artists, this broad retrospective decodes the symbolism and artistry of a richly creative form of reading pleasure.

Damien MacDonald is a comic book illustrator and curator who published a graphic novel adaptation of Victor Hugo’s Hunchback of Notre-Dame. His work has been shown in museums and galleries in France, Norway, Belgium, China, and Monaco. He curated the Marginalia exhibition for the Nouveau Musée National de Monaco.

“Many a great book has been written about comics ... but few penned as ambitiously as this.... Visually splendid.… An essential resource for comics readers.” –Buzz

“By providing little snapshots of seminal work from the past to present, Anatomy of Comics ... provide[s] a fantastic overview.... It’s a superb book for those curious about the history of comics. Five out of five stars.” –Forces of Geek

“Whether you like superheroes, a slice of life, humour, non-fiction, science fiction, fantasy or horror there is something for everyone.” – .Cent Magazine

“An engrossing read filled with fascinating facts complemented with awesome art from all over the world.” –Boyce McClain’s Consumers’ and Collectors’ Corner

“A wide-ranging snapshot of a number of key and important comic works throughout time.” –Forces of Geek

“One would hope a book about the beauty of the comic arts would present itself in an eye-catching manner, and Anatomy of Comics … looks darn pretty.” –Forces of Geek