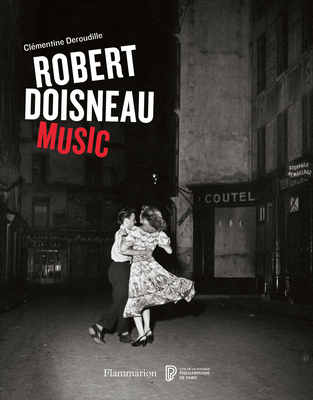 
Special Order—Subject to Availability
Previously unpublished photographs and iconic portraits of musicians from the 1950s through the 1980s offer a new perspective on Doisneau's remarkable talent.

Master photographer Robert Doisneau's passion for the joyful energy inherent in the music world comes alive in images that cover the musical spectrum, from classical and jazz to be-bop to the roots of modern rap and alternative rock. With camera in hand, Doisneau crisscrossed Paris to capture intimate moments with star musicians such as Eartha Kitt in a jazz club, Django Reinhardt at home, and Yehudi Menuhin backstage, or with locals at a neighborhood dance or jamming in a brass band. His portraits were commissioned for stars from Juliette Gréco to Charles Aznavour to Claude François, and a new generation of musicians in the 1980s including Rita Mitsouko and Les Négresses Vertes.

This book--curated by the photographer's granddaughter to accompany an exhibition at the Philharmonie de Paris--includes more than one hundred photographs, many previously unpublished, that showcase the artist's mastery in editing, special effects, photomontage, collage, photo distortions, and splits.
Robert Doisneau (1912-1994) was a major photographer whose work appeared in Life, Paris Match, and Vogue. Major posthumous retrospectives of his work were held in Paris, Chicago, and New York. Flammarion has published numerous volumes devoted to his work including Robert Doisneau: Paris, Doisneau: Portraits of the Artists, Robert Doisneau: Palm Springs 1960, Robert Doisneau: Paris, Les Halles Market, The Best of Doisneau: Paris, and Robert Doisneau: The Vogue Years. His granddaughter Clémentine Deroudille, a radio and documentary producer, curated the accompanying exhibition at the Philharmonie de Paris.
"The selection of photos also features in a book published by Flammarion in the United States this month, entitled Robert Doisneau, Music, and is accompanied by an original text from the artist’s granddaughter Clémentine Deroudille. Aznavour, Brassens, Claude François, Les Rita Mitsouko, and Les Négresses Vertes are just a few of the stars seen posing for portraits or captured on stage, behind the scenes, or in the studio." —FRANCE-AMÉRIQUE MAGAZINE