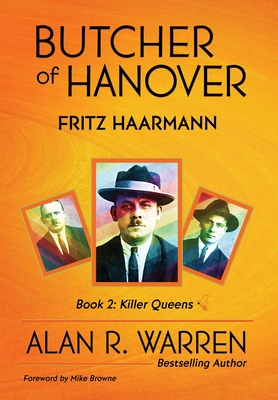 Killer Queens is a new series of historical fiction books based on true stories. The series explores the world of murder in the gay community, whether the victims or the killers themselves and sometimes both, are homosexual.

Book 2 of the series focuses on the serial killer of at least 27 young men and boys in Germany in the post-World War 1 era. At the center of this murder case were Fritz Haarmann and Hans Grans, who were lovers while committing these murders. It wasn't until the skulls and bones started washing ashore from the Leine River in Hanover that Germany realized they had a cold-blooded serial killer in their country.

Unlike Leopold and Loeb murder case covered in Book 1, where the dominance shifted from one to the other, Fritz Haarmann was the dominant partner in this case. He carried out each of the murders and dismemberment of the bodies himself, even though he claimed that Grans chose who was to be murdered in court.

As you read the exploration of the case in this book, ask yourself, did Haarmann murder each victim to keep his lover Hans Grans to stay with him? Did Grans decide who it was that was to be murdered? The evidence on this case will keep you on the edge of your seat, trying to determine who was really behind these gruesome murders.