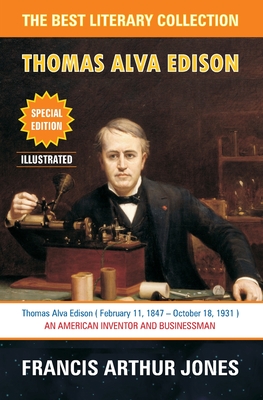 
Not On Our Shelves—Ships in 1-5 Days
(This book cannot be returned.)
Thomas Alva Edison (February 11, 1847 - October 18, 1931) was an American inventor and businessman, who has been described as America's greatest inventor. He developed many devices that greatly influenced life around the world, including the phonograph, the motion picture camera, and the long-lasting, practical electric light bulb. Dubbed "The Wizard of Menlo Park", he was one of the first inventors to apply the principles of mass production and large-scale teamwork to the process of invention, and because of that, he is often credited with the creation of the first industrial research laboratory. Edison was a prolific inventor, holding 1,093 US patents in his name, as well as many patents in the United Kingdom, France, and Germany. More significant than the number of Edison's patents was the widespread impact of his inventions: electric light and power utilities, sound recording, and motion pictures all established major new industries worldwide. Edison's inventions contributed to mass communication and, in particular, telecommunications. These included a stock ticker, a mechanical vote recorder, a battery for an electric car, electrical power, recorded music and motion pictures. His advanced work in these fields was an outgrowth of his early career as a telegraph operator. Edison developed a system of electric-power generation and distribution to homes, businesses, and factories - a crucial development in the modern industrialized world.
Francis Arthur Jones was an English writer and journalist (3, 15 May 1871 in Chester), born Francis Arthur Launcelot Jones; also known as Francis Arthur Jameson. A native of the English city of Chester, he lost his father, William Jones, at an early age. Francis and his mother, Anne, who was of Irish stock, moved to Devon during the 1880s where Mrs. Jones became a lodging house proprietor. After completing his school education Francis worked as a tutor for a few years, but eventually embarked upon a career as a music writer and journalist for The Strand Magazine.