The Kids Are Not Alright: A Meme Enhanced Primer on Encroaching Marxism in the West (Paperback) 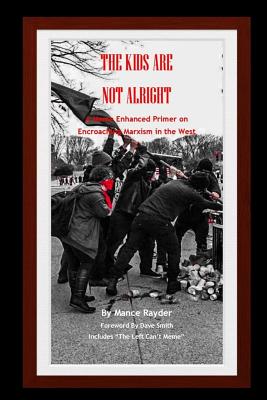 The Kids Are Not Alright: A Meme Enhanced Primer on Encroaching Marxism in the West (Paperback)

"It is patently absurd that the case against socialism still has to be made. One who identifies as a Marxist should be treated as seriously as someone debating the merits of slavery or longing for the days of the bubonic plague. We should all thank God everyday that we were not born into such a hell on earth."-Dave Smith (from the Foreword)

In his second offering, Mance Rayder has decided to tackle a subject that many see as a threat to liberty in the West; creeping Marxism/Socialism.

Many unsuspecting parents are spending tens of thousands of dollars to send their children off to the "finest universities in the land" only to get back an unrecognizable (visually and ideologically) "activist" spewing the failed teachings of Karl Marx while celebrating the actions of murderous "revolutionaries" such as Che Guevara. An alarming number of college professors have taken to indoctrinating young minds with teachings that were responsible for well over 100,000,000 million deaths in the 20th Century alone.

In this "primer," Mance details how Marxism has already found its way into our political system, while laying out how this has happened, and why. He gives real life examples of this playing out on college campuses leading to movements against "free speech," while detailing how this has spilled out not only into the streets, but into the Human Resources departments of most major companies and beyond.

The main purpose of this work is to present a simplified warning to young people of a dangerous ideology they will be confronted with when they go off to college. Parents that are aware of this inevitable problem can use this primer, along with their own counsel, to inoculate their children against this dangerous teaching.

The secondary purpose to to teach those of all ages, especially those that are too busy to follow the "goings-on" in society, of a movement they may have missed that is affecting their daily lives without them knowing.

As was the case in Mance's first book, he uses the popular form of communication among the young and old alike, the internet "meme," to catch the attention of the reader while making his case as to why this encroaching Marxist/Socialist philosophy is not only dangerous to our freedoms, but also to our very existence.

Mance added a section at the end especially for those that have followed him on social media and bought his first book entitled, "The Left Can't Meme - An Analysis."

Mance grew up in the government controlled hellhole that is New York City. He left 2 days after graduating high school. He spent a good bit of time in South Florida where he met his wife. In 2005 they moved to the Atlanta metro area where in 2007 he discovered the Ron Paul Liberty movement. This school of thought sent him down a rabbit hole of freedom-seeking culminating in the intellectual move to Voluntaryism. This radically capitalist school of thought permeates his life and led him to the teachings he now shares on the podcast entitled Free Man Beyond the Wall. There are numerous podcasts out there that concentrate on the scholarly pursuits of economics and ethics. Most of them use language that goes over the head of the average person who is looking to grow in knowledge and in confidence. Mance talks like somebody that you would meet on the street because that's where he's from. More than anything he wants you to get excited and motivated about liberty. In November of 2017, Mance released his first book, "Freedom Through Memedom - The 31-day Guide to Waking Up to Liberty." It reached #4 in the Libertarian Section on Amazon.com. Mance has appeared on several podcasts including The Tom Woods Show, Dave Smith's Part of the Problem, Lions of Liberty with Marc Clair and The Vin Armani Show. Mance is a featured contributor at LibertarianInstitute.Org