Create Dangerously: The Power and Responsibility of the Artist (Paperback) 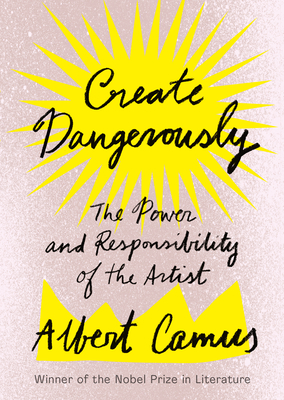 Create Dangerously: The Power and Responsibility of the Artist (Paperback)

By Albert Camus, Sandra Smith (Translated by)
List Price: $8.00
Our Price: $7.95
(Save: $0.05 1%)
On Our Shelves Now at:
“To create today means to create dangerously. Every publication is a deliberate act, and that act makes us vulnerable to the passions of a century that forgives nothing.”

In 1957, Nobel Prize-winning philosopher Albert Camus gave a speech entitled "Create Dangerously," effectively a call to arms for artists, in particular those who came from an immigrant background, like he did. Camus understood the necessity of those making art as a part of civil society. A bold cry for artistic freedom and responsibility, his words today remain as timely as ever. In this new translation, Camus's message, available as a stand-alone little book for the first time, will resonate with a new generation of writers and artists.
Born in Algeria in 1913, Albert Camus published The Stranger—now one of the most widely read novels of this century—in 1942. Celebrated in intellectual circles, Camus was awarded the Nobel Prize in Literature in 1957. On January 4, 1960, he was killed in a car accident.