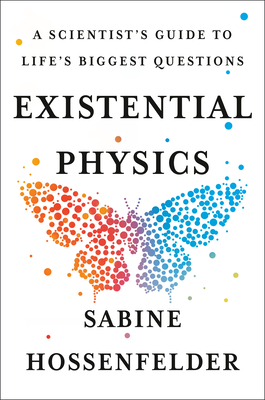 
On Our Shelves Now at:
A NEW YORK TIMES BESTSELLER

“An informed and entertaining guide to what science can and cannot tell us.” —The Wall Street Journal

“Stimulating . . . encourage[s] readers to push past well-trod assumptions […] and have fun doing so.” —Science Magazine

From renowned physicist and creator of the YouTube series “Science without the Gobbledygook,” a book that takes a no-nonsense approach to life’s biggest questions, and wrestles with what physics really says about the human condition

Not only can we not currently explain the origin of the universe, it is questionable we will ever be able to explain it. The notion that there are universes within particles, or that particles are conscious, is ascientific, as is the hypothesis that our universe is a computer simulation.  On the other hand, the idea that the universe itself is conscious is difficult to rule out entirely.

According to Sabine Hossenfelder, it is not a coincidence that quantum entanglement and vacuum energy have become the go-to explanations of alternative healers, or that people believe their deceased grandmother is still alive because of quantum mechanics. Science and religion have the same roots, and they still tackle some of the same questions: Where do we come from? Where do we go to? How much can we know? The area of science that is closest to answering these questions is physics. Over the last century, physicists have learned a lot about which spiritual ideas are still compatible with the laws of nature. Not always, though, have they stayed on the scientific side of the debate.

In this lively, thought-provoking book, Hossenfelder takes on the biggest questions in physics: Does the past still exist? Do particles think? Was the universe made for us? Has physics ruled out free will? Will we ever have a theory of everything? She lays out how far physicists are on the way to answering these questions, where the current limits are, and what questions might well remain unanswerable forever. Her book offers a no-nonsense yet entertaining take on some of the toughest riddles in existence, and will give the reader a solid grasp on what we know—and what we don’t know.
Sabine Hossenfelder is presently a research fellow at the Frankfurt Institute for Advanced Studies, Germany, and has published more than eighty research articles about the foundations of physics, including quantum gravity, physics beyond the standard model, dark matter, and quantum foundations. She has written about physics for a broad audience for fifteen years and is the creator of the popular YouTube channel “Science without the Gobbledygook.” Her writing has been published in New Scientist, Scientific American, The New York Times, and The Guardian (London). Her first book, Lost in Math: How Beauty Leads Physics Astray, appeared in 2018.
“The most surprising and interesting feature of the book is the claim that many of her physicist peers are as guilty of bringing speculation and belief into their scientific thinking as theologians and New Age mystics . . . Existential Physics is an informed and entertaining guide to what science can and cannot tell us. If Ms. Hossenfelder is sometimes a little too opinionated, the reader will quickly forgive her. Anyone capable of bridging the concerns of the human world and the baffling complexities of physics has earned the right to be indulged a little.”
—The Wall Street Journal

“You may not have expected this month’s most entertaining book to be about science. Hossenfelder, an acclaimed physicist, not only explains her subject well; she also engages general readers in connecting science with spirituality . . . Read Hossenfelder along with a basic guide to physics and keep an open mind about her conclusions, but most importantly, enjoy the ride."
—Los Angeles Times

“Stimulating . . . encourage[s] readers to push past well-trod assumptions […] and have fun doing so . . . By demarking ascientific views from scientific ones, she helps delineate science’s limits in answering life’s big questions.”
—Science Magazine

“Hossenfelder elegantly illustrates complex ideas in straightforward, layfriendly language . . . [She] takes readers on a riveting cerebral journey through surprisingly confounding differences between scientific method and storytelling . . . In addition to her own powerful voice, Hossenfelder includes enlightening interviews with [...] luminaries in the field . . . Existential Physics is spectacular, and a must-read for all who ponder the purpose of existence.”
—Booklist

“Unlike many other science writers, Hossenfelder is less interested in denouncing pseudoscience than revealing that many spiritual ideas are compatible with modern physics . . . Casting her net widely, she investigates God and spirituality, free will, universal consciousness, dualism (whether the mind is separate from the body), the Big Bang theory about the origin of the cosmos, the possible existence of parallel universes, and whether we live in a computer simulation . . . readers who wonder how to tell a good from a bad explanation can now consult [Existential Physics] . . . An intriguing book fully of highly opinionated and convincing arguments.”
—Kirkus Reviews

“[An] excellent book on physics for general readers . . . Hossenfelder uses current and historical research to show the deep connections between philosophy and the scientific method . . .  Recommended for readers interested in philosophy of science and the sorts of questions that current science can and can’t answer.”
—Library Journal

“Smart . . . [Hossenfelder] explores fascinating questions . . . though she asserts that 'physicists are really good at answering questions, but really bad at explaining why anyone should care,' her curiosity and clever prose prove that doesn’t have to be the case. Budding physics buffs, take note.”
—Publishers Weekly

“Part gonzo journalist, part curious child, part teacher, and part accomplished researcher, Sabine Hossenfelder is a unique writing talent and a unique science popularizer. One cannot help being provoked reading her prose, as she knows how to push your buttons. But she also abhors bullshit, which makes her take on the deepest human questions and what physics has to say about them worth looking at, and also ensures that it will be different than those other physics books of grand verbosity about frontier physics. You might agree with her. You might not. But you will come away from the experience enriched, and will think about the world differently than you did before.”
—Lawrence Krauss, bestselling author of The Physics of Star Trek, A Universe from Nothing, and The Physics of Climate Change

“Sabine Hossenfelder is a rare gem. There are other theoretical physicists out there who can write for a popular audience, but very few of them are able to do so in such a no-nonsense way. There's no puffery or posturing, but a direct and potent takedown of some of the fashionable ideas lounging at the edges of modern science. The result is not just illuminating, but enjoyable.”
—Charles Seife, author of Decoding the Universe

“Sabine Hossenfelder offers a radical and brand-new exploration of the limits and power of scientific explanation to address the most pressing existential questions that strike to the core of the essential curiosity that makes us human in the first place. Her book offers a riveting and remarkably original take that makes room for hope, belief and faith within the house of reason and rationality. A must-read to better navigate this chaotic and complex current moment.”
—Priyamvada Natarajan, author of Mapping the Heavens: The Radical Scientific Ideas That Reveal the Cosmos

"I don't always agree with Sabine Hossenfelder, but I'm always eager to hear what she has to say. She is one of our boldest young thinkers, and not just in physics. Her new book provides a splendid showcase for her iconoclastic outlook."
—John Horgan, author of The End of Science and director of the Center for Science Writings at Stevens Institute of Technology