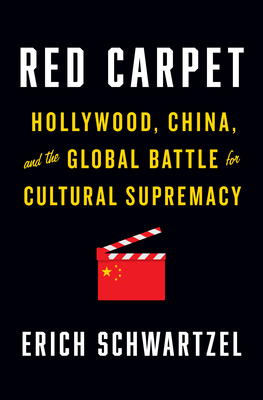 
On Our Shelves Now at:
"This is a fascinating book. It will educate you. Schwartzel has done some extraordinary reporting."  — The New York Times Book Review

“In this highly entertaining but deeply disturbing book, Erich Schwartzel demonstrates the extent of our cultural thrall to China. His depiction of the craven characters, American and Chinese, who have enabled this situation represents a significant feat of investigative journalism. His narrative is about not merely the movie business, but the new world order.” —Andrew Solomon, author of Far from the Tree and The Noonday Demon

An eye-opening and deeply reported narrative that details the surprising role of the movie business in the high-stakes contest between the U.S. and China

From trade to technology to military might, competition between the United States and China dominates the foreign policy landscape. But this battle for global influence is also playing out in a strange and unexpected arena: the movies.

The film industry, Wall Street Journal reporter Erich Schwartzel explains, is the latest battleground in the tense and complex rivalry between these two world powers. In recent decades, as China has grown into a giant of the international economy, it has become a crucial source of revenue for the American film industry. Hollywood studios are now bending over backward to make movies that will appeal to China’s citizens—and gain approval from severe Communist Party censors. At the same time, and with America’s unwitting help, China has built its own film industry into an essential arm of its plan to export its national agenda to the rest of the world. The competition between these two movie businesses is a Cold War for this century, a clash that determines whether democratic or authoritarian values will be broadcast most powerfully around the world.

Red Carpet is packed with memorable characters who have—knowingly or otherwise—played key roles in this tangled industry web: not only A-list stars like Matt Damon, Angelina Jolie, and Richard Gere but also eccentric Chinese billionaires, zany expatriate filmmakers, and starlets who disappear from public life without explanation or trace. Schwartzel combines original reporting, political history, and show-biz intrigue in an exhilarating tour of global entertainment, from propaganda film sets in Beijing to the boardrooms of Hollywood studios to the living rooms in Kenya where families decide whether to watch an American or Chinese movie. Alarming, occasionally absurd, and wildly entertaining, Red Carpet will not only alter the way we watch movies but also offer essential new perspective on the power struggle of this century.
Erich Schwartzel has reported on the film industry for The Wall Street Journal since 2013. Previously, he covered energy and the environment for The Pittsburgh Post-Gazette, where his work won the Scripps Howard Award for Environmental Reporting. He lives in Los Angeles.

“Schwartzel tells the story of how Chinese investments in Hollywood and the Communist Party’s role in deciding what Chinese audiences could see swiftly inverted the power relationship between China and the United States in this immensely influential industry. . . . Schwartzel makes this story of big stars and big money a page-turner, but its implications are much larger.” —Foreign Affairs

“Red Carpet is the story of the nexus that formed when Hollywood realized it needed China’s cash, and China realized it could first manipulate—and then appropriate—Hollywood’s special gifts for enchantment, coercion, lifestyle control, and inducing audiences to tear up by means of orchestral swells and Tom Hanks talking earnestly to small children. . . . The two stories, the humbling of Hollywood and the swelling of Chinese soft power, twist and combine across Schwartzel’s masterfully organized book. . . . This is a fascinating book. It will educate you. Schwartzel has done some extraordinary reporting, and a lot of legwork.” —The New York Times Book Review

“An extraordinary narrative. . . . A fascinating and timely account of how Hollywood’s once-promising relationship with its most important market has gone horribly wrong. . . . Schwartzel’s trove of colorful and at-times-ludicrous anecdotes are invaluable.” —Reuters

“Red Carpet will change the way you watch movies. . . . A fascinating exploration of the Chinese entertainment apparatus and how seemingly innocuous American films can become international flashpoints. . . . Red Carpet is both a movie nerd’s dream and nightmare in the sense that it contains fascinating information that may make readers more wary of the entertainment they consume. If you love movies and are willing to take that risk, you won’t be disappointed by following Schwartzel down this particular rabbit hole.” —The Pittsburgh Post-Gazette

“Fascinating and disturbing. . . . Avid viewers will be surprised by this exposé of the seedy partnership between Hollywood and the Chinese government.” —Kirkus (starred review)

“Schwartzel makes an eye-opening debut with this accomplished account of how soft power—namely, entertainment—helped China become one of the most influential players on the global stage. . . . An illuminating look at what China learned from Hollywood, and why Hollywood needs China to survive. It’s a fascinating take on the crossroads of film and global politics.” —Publishers Weekly

“Schwartzel’s narrative emphasizes the trajectories of specific films and is leavened by interviews with directors and studio executives as well as a sophisticated understanding of internal Chinese political dynamics.” —Booklist

“China’s growing influence on Hollywood has been one of the biggest, and least understood, stories in the world. Erich Schwartzel brilliantly blends groundbreaking reporting, riveting stories, and brave analysis to reveal the enormous stakes involved for American popular culture and democracy itself. Like a great movie, this book is hugely entertaining and changes the way you look at the world.” —Ben Rhodes, author of After the Fall

“Wow. It’s no secret that, for years, Hollywood moviemaking has been in a substantive free-fall. But saying so would get you called a Cassandra because you’re ruining so-and-so’s dinner party with your slanderous conjecture. Well, now Erich Schwartzel’s written a whole book—a lucid, engrossing, rigorously, adventurously reported book; a shocking book, honestly—about one industry’s acquiescent collapse in the face of another’s ascent. For money. The studios might now be flush with cash. But this book reveals the ways in which the American end of the business is near its end. It illustrates how there is no American movie industry if in greedily seeking to conquer China it just wound up conceding to it. Here’s the rare feat of investigative culture journalism that doesn’t aim for gossip yet, somehow, is all the juicer for it. Every couple of pages holds another jaw-dropper. It’s made me smarter about both Hollywood and China. No more conjecture from me. Next dinner party, I’m making the skeptics eat Schwartzel’s receipts.” —Wesley Morris, two-time winner of the Pulitzer Prize for Criticism

“What’s the Hollywood version of the U.S.-China relationship? A story in which John Wayne plays Genghis Khan, and Kung Fu Panda inspires great angst among Communist Party officials, and Avatar, the highest-grossing movie of all time, gets pulled from Chinese theaters and is replaced by a biopic about Confucius. The fact that all of these things really happened is what makes Erich Schwartzel’s Red Carpet so vivid and entertaining. By examining the history of Hollywood and China in unprecedented detail, Schwartzel illuminates the larger geopolitical culture clash that is likely to shape the world for years to come.” —Peter Hessler, author of Oracle Bones and The Buried

“In the ongoing ideological struggle between democracy and authoritarianism, popular entertainment has emerged as an unlikely but critical battleground. Epic in scope and meticulously researched, Red Carpet reads like dispatches from the front lines of this war, whose outcome will help to determine our future. Always compelling and often chilling, Erich Schwartzel's invaluable work shows how the power of narrative continues to change the world.” —David Henry Hwang, Tony Award winner for M. Butterfly and Pulitzer Prize finalist for Soft Power

“It's often presumed that American companies have to toe the Communist Party's line to access China's markets. Erich Schwartzel's new book offers us a commanding and fly-on-the-wall account of how Beijing has come to own Hollywood and change a hallmark of the American culture.” —Lingling Wei, co-author of Superpower Showdown

“Erich Schwartzel sheds fresh light and understanding on the evolution of Hollywood’s fraught relationship with the Chinese Communist Party as well as the nature of this century’s high stakes competition between totalitarianism and democracy. The story in Red Carpet demonstrates how, in art and in life, the Party coopts and coerces leaders across the free world to support its violent self-conception as a one-party nation with no room for plurality except on its own rigid terms. Please read this book and demand that those who sit in Hollywood’s board rooms stop sacrificing principle on the altar of profit.” —Lt. General H.R. McMaster (Ret.), former National Security Advisor and author of Battlegrounds and Dereliction of Duty

“In this highly entertaining but deeply disturbing book, Erich Schwartzel demonstrates the extent of our cultural thrall to China. His depiction of the craven characters, American and Chinese, who have enabled this situation represents a significant feat of investigative journalism. His narrative is about not merely the movie business, but the new world order.” —Andrew Solomon, author of Far from the Tree and The Noonday Demon

“In the ongoing ideological struggle between democracy and authoritarianism, popular entertainment has emerged as an unlikely but critical battleground. Epic in scope and meticulously researched, Red Carpet reads like dispatches from the front lines of this war, whose outcome will help to determine our future. Always compelling and often chilling, Erich Schwartzel's invaluable work shows how the power of narrative continues to change the world.” —David Henry Hwang, Tony Award winner for M. Butterfly and Pulitzer Prize finalist for Soft Power

“Erich Schwartzel has told a hugely entertaining and deeply revealing story about China’s disturbing aspirations. Red Carpet is juicy and quietly damning, a brilliant anthropology of both Hollywood and Beijing. It’s one of the most fun books about global politics I’ve ever read.” —Franklin Foer, author of World Without Mind and How Soccer Explains the World