This Is a Prototype: The Curious Craft of Exploring New Ideas (Stanford d.school Library) (Paperback) 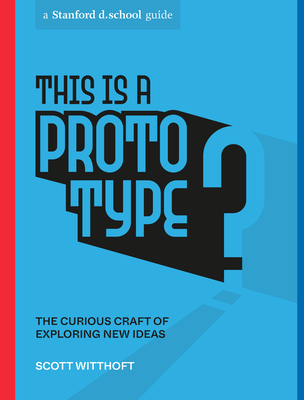 This Is a Prototype: The Curious Craft of Exploring New Ideas (Stanford d.school Library) (Paperback)


On Our Shelves Now at:
A practical guide to prototyping as a way to revolutionize your work and creative life, from Stanford University's world-renowned Hasso Plattner Institute of Design, aka the d.school.

Prototyping is a way to test an idea to see if it can be successful before investing too much time and too many resources. But it's not only designers who "prototype" as they work. A skateboarder tries a new trick; that's a prototype experience. A chef experiments with a new dish and new ingredients; that's a prototype experience, too. Once a prototype is made, the creator gains knowledge about what worked and what didn't, what should be used again and what should be trimmed from the experience.

This is a book about becoming better at prototyping by building things and experiences that will help you learn from your attempts, no matter what you're aiming to achieve. Readers will learn how to not only create prototypes but also how to reflect on the success and failure of those attempts. Scott Witthoft, who teaches courses in design and prototyping to students around the world, introduces a comprehensive number of tools and materials for prototyping, including digital platforms and physical objects. And he breaks down real-life examples of prototype experiments with accompanying photographs for the reader to observe large- and small-scale prototyping in action.

With Witthoft as your guide, you'll put the principles of design into practice and bring your vision to life—one prototype at a time.
Scott Witthoft works as an educator, designer, and author. Drawing from his past practice of forensic structural engineering, he incorporates that expertise with current pursuits in space, furniture, and product design—teaching and speaking widely. He is the co-author of Make Space, a tool for creating collaborative environments. His work has been featured in The Design Museum and publications such as Fast Company, Architecture and Urbanism, and Metropolis.

The Hasso Plattner Institute of Design, known as the d.school, was founded at Stanford University in 2005. Each year, nearly a thousand students from all disciplines attend classes, workshops, and programs to learn how design can enrich their own work and unlock their creative potential.
“This sharp little book will get you making more with less. Dozens of methods show how designers can use prototypes for asking questions, framing experiences, and observing behaviors. The bright illustrations and concrete examples will show you how to ground your prototypes in crystal-clear intentions.”—Ellen Lupton, co-author of Health Design Thinking

“This Is a Prototype is filled with actionable tactics and a terrific emphasis on how to ask good questions, the prerequisite for all the world’s best answers. This book is the Lonely Planet guide to your brain, for people who want to get off their own beaten paths and make new ones.”—John Cassidy, founder of Klutz Press