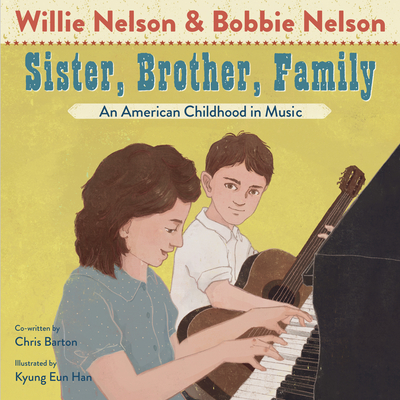 
Not On Our Shelves—Ships in 1-5 Days
The first ever children's book by music legend Willie Nelson and his sister and bandmate Bobbie Nelson!

"We had so little money, but so much love."

He was a boy with a guitar. She was a girl with a piano. Raised by loving grandparents in Depression-era rural Texas, their humble beginnings playing local shows to put food on the table started Willie and Bobbie Nelson on a remarkable path to global stardom. In a story filled with details of a childhood in rural Texas—with church socials, general stores, and town dances—Willie and Bobbie weave together an inspiring story of a long-ago time. With triumphs and tragedies, hard work and determination, here is a deeply personal, gorgeously-written, and profoundly moving tale of hope.
WILLIE NELSON is a music legend and national treasure with a six-decade career and over 200 albums. This iconic Texan is the creative genius behind the historic recordings of Red Headed Stranger, Crazy, and Stardust. Willie has earned countless awards and accolades as a musician, in addition to being a celebrated author, actor, and activist. He continues to thrive as a musical and cultural force, writing, singing, and playing with the wit and wisdom that comes from a life on the road. Learn more about his work on willienelson.com and follow him on Instagram at @willlienelsonofficial and on Twitter and Facebook at @willienelson.

BOBBIE NELSON has played piano alongside her brother, Willie Nelson, for more than 50 years. She started in Abbott, Texas, as a young musician and reconnected musically with Willie in 1973 to record his album The Troublemaker. She has been a member of his Family Band ever since. In 2007, at age 76, Bobbie released her solo debut, Audiobiography, and in 2014, the brother-sister duo put out December Day, inspired by their many years playing and recording together. She is an inductee in the Texas Country Music Hall of Fame, and the state of Texas declared February 23 as “Bobbie Nelson Day.”

CHRIS BARTON (co-writer) is the author of a number of acclaimed picture books, including Whoosh! Lonnie Johnson's Super-Soaking Stream of Inventions, a Texas Bluebonnet Award nominee and a Junior Library Guild selection. He lives in Austin, Texas. Learn more about his work at chrisbarton.info and follow him on Twitter at @Bartography.

KYUNG EUN HAN lives in Anyung, Korea, and is the illustrator of the picture book biography Hard Work, But It's Worth It: The Life of Jimmy Carter. See more of her work on Instagram at @kyung_illust.
"A personal-feeling family story that firmly reinforces the power of music as connective tissue in two country stars’ lives."—Publishers Weekly