The Lie About the Truck: Survivor, Reality TV, and the Endless Gaze (Hardcover) 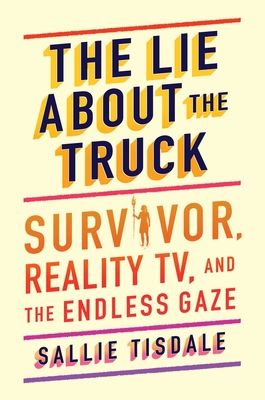 The Lie About the Truck: Survivor, Reality TV, and the Endless Gaze (Hardcover)


In Stock—Click for Locations
The author of the acclaimed Advice for Future Corpses (and Those Who Love Them) brings “her singular sensibility, her genius for language, her love of our deeply imperfect world” (Karen Karbo, author of In Praise of Difficult Women) to this insightful exploration of reality TV and the shifting definitions of truth in America.

What is the truth?

In a world of fake news and rampant conspiracy theories, the nature of truth has increasingly blurry borders. In this clever and timely cultural commentary, award-winning author Sallie Tisdale tackles this issue by framing it in a familiar way—reality TV, particularly the long-running CBS show Survivor.

With humor and in-depth superfan analysis, Tisdale explores the distinction between suspended disbelief and true authenticity both in how we watch shows like Survivor, and in how we perceive the world around us. With her “bold and wise, galvanizing and grounding” (Chloe Caldwell, author of I’ll Tell You in Person) writing, Tisdale has created an unputdownable, thoroughly entertaining, and groundbreaking book that we will be talking about for years to come.
Sallie Tisdale is the author of several books, including Advice for Future Corpses (and Those Who Love them), Violation, Talk Dirty to Me, Stepping Westward, and Women of the Way. She has received a Pushcart Prize, an NEA Fellowship, the James D. Phelan Literary Award, and was selected for the Shoenfeldt Distinguished Visiting Writer Series. Her work has appeared in Harper’s, The New Yorker, The Threepenny Review, The Antioch Review, Conjunctions, and Tricycle. In addition to her award-winning writing career, Tisdale has been a nurse for many years, including a decade in palliative care. She lives in Portland, Oregon. Visit her online at SallieTisdale.com.
“An extensive study of Survivor that argues that reality television as a whole is both a performed reality—by the stars of the show—and a perceived reality by its avid audience… As a breezy roundup of Survivor’s melodrama, the book succeeds… Light and diverting.”--Library Journal

“A fascinating exploration of the enduring attraction and success of ‘the greatest social experiment on television’… What her sharp observations reveal is that parsing truth from perception is a fool’s errand… This fascinating study will be like candy for fans of the show and pop culture enthusiasts alike.”--Publishers Weekly