Seven Days of Rage: The Deadly Crime Spree of the Craigslist Killer (Paperback) 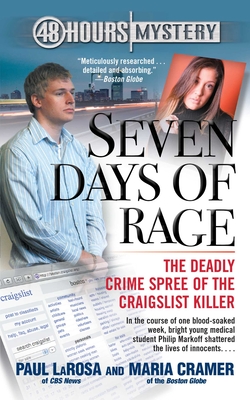 Seven Days of Rage: The Deadly Crime Spree of the Craigslist Killer (Paperback)


Not On Our Shelves—Ships in 1-5 Days
From a producer of 48 Hours Mystery and The Boston Globe reporter comes the full account of the shocking crime spree of the infamous Craigslist Killer.

In this “detailed and absorbing” (The Boston Globe) true crime book, discover the many mysteries behind the secret life of the brilliant and well-liked Boston University medical student who came to be known as the Craigslist Killer. How was he able to conceal his dark side to all who knew him, even his sweet and trusting fiancée? What was his motivation to use the online bulletin board to find his victims? And what were the clues—pieces of an astonishing puzzle—that led Boston police to arrest the clean-cut, all-American young man with no criminal record who was in reality an out-of-control thrill seeker hiding a lethal sexual life?
Paul Larosa is an Emmy Award-winning producer for the CBS newsmagazine 48 Hours. He won a Primetime Emmy for the acclaimed CBS documentary 9/11, and has also won a Peabody Award, a Christopher Award, and an Edward R. Murrow Award. For sixteen years he was reporter for the Daily News (New York), where he was the co-winner with Anna Quindlen of the Meyer Berger Award given by Columbia University’s School of Journalism. He lives in Brooklyn with his wife and their two children.

Maria Cramer is a reporter for The Boston Globe who covers numerous crime stories, including the case of Clark Rockefeller, who gained international attention in 2008 when he kidnapped his daughter from a Boston Park and was later connected to the 1984 disappearance of a California couple. She lives in Jamaica Plain, Massachusetts.