Tech Panic: Why We Shouldn't Fear Facebook and the Future (Hardcover) 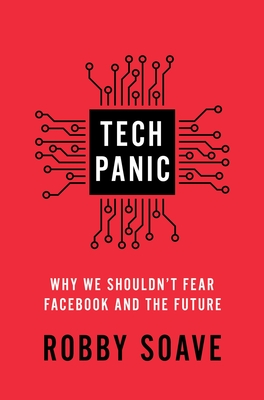 Tech Panic: Why We Shouldn't Fear Facebook and the Future (Hardcover)


Not On Our Shelves—Ships in 1-5 Days
From award-winning journalist and author of the “methodical, earnest, and insightful” (The Guardian) Panic Attack, an examination of recent kneejerk calls to regulate Big Tech from both sides of the aisle.

Not so long ago, we embraced social media as a life-changing opportunity to connect with friends and family all across the globe. Today, the pendulum of public opinion is swinging in the opposite direction as Facebook, Twitter, Google, YouTube, and similar sites are being accused of corrupting our democracy, spreading disinformation, and fanning the flames of hatred. We once marveled at the revolutionary convenience of ordering items online and having them show up on our doorsteps, sometimes overnight. Now we fret about Amazon outsourcing our jobs overseas, or building robots to do them for us.

Here, with insightful analysis and in-depth research, Robby Soave explores some of the biggest issues animating both the right and the left: bias, censorship, disinformation, privacy, screen addiction, crime, and more. Far from polemical, Tech Panic is grounded in interviews with insiders at companies like Facebook and Twitter, as well as expert analysis by both tech boosters and skeptics—from Mark Zuckerberg to Josh Hawley. Readers will learn not just about the consequences of Big Tech, but also the consequences of altering the ecosystem that allowed tech to get big. Offering a fresh and crucial perspective on one of the biggest influences of the 21st century, Robby Soave seeks to stand athwart history and yell, Wait, are we sure we really want to do this?
Robby Soave is an award-winning journalist and author. He is a senior editor at the libertarian magazine Reason, where he writes about free speech, education and tech policy, criminal justice reform, and cancel culture, among other subjects. His work has also appeared in The New York Times, The Daily Beast, US News & World Report, and more. In 2016, Forbes named him to the “30 Under 30” list in the category of law and policy. In 2017, he became a Novak Fellow at The Fund for American Studies. He also serves on the DC Advisory Committee to the US Commission on Civil Rights. Soave appears frequently on TV and radio.
"...Soave raises worthy free speech concerns. This sober account strikes a persuasive note of caution." —Publishers Weekly

“With Robby Soave’s Tech Panic, we finally have a book that cuts to the chase. This reads like a chat with a very smart friend who took the time to think all of these questions through—and who isn’t beholden to any one side.” —Dana Perino, former White House press secretary and Fox News anchor

"At long last, a refreshing dose of sanity and common sense about big tech. In Tech Panic, Robby cuts through the political hyperbole to expose a core truth—Americans enjoy greater access to the marketplace of ideas than at any time in human history, and that's a very good thing indeed." —David French, senior editor at The Dispatch and author of Divided We Fall

"I have a certain admiration for those who have taken Zuckerberg’s side in the last week, notably Robby Soave, author of Tech Panic: Why We Shouldn’t Fear Facebook and the Future.” —Niall Ferguson, Bloomberg Opinion