The Road Taken: A Memoir (Hardcover) 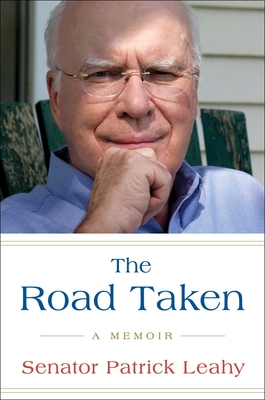 The Road Taken: A Memoir (Hardcover)

In his landmark memoir The Road Taken, Patrick Leahy looks back on a life lived on the front lines of American politics. As the senior-most member and de facto dean of the chamber, Senator Leahy has been a key author of the American story. Leahy established himself as a moral leader and liberal pioneer over four decades spanning nine presidential administrations.

American history comes alive in this gripping story of a master political leader and consummate legislator. Leahy takes you inside the room as pivotal moments in our nation’s history play out, from the post-Watergate reform era to path breaking Supreme Court confirmations to stress tests like the impeachment of President Clinton, 9/11 and Congress’s role in greenlighting a disastrous war in Iraq, the January 6th Capitol insurrection, and both impeachment trials of Donald Trump—one of which Senator Leahy presided over, a historic first.

Beautifully written and filled with wonderful stories, Leahy’s memoir is populated by a larger-than-life cast of characters. We meet the major players who would shape the course of American politics, including every President from Ford onward, a fresh-faced Ted Kennedy, a dying Hubert Humphrey, a thirty-three-year-old son of Scranton named Joe Biden, a quick-witted Barry Goldwater, a freshman Senator and trash-talking gym-mate named Barack Obama, and a scrappy newcomer by the name of Bernie Sanders. Through these characters and many more, we see the rise, gradual decline, and push for redemption of a United States Senate that Leahy learns at an early age can be the “nation’s conscience.”

The Road Taken is also a moving personal portrait. Born in Vermont in 1940, Leahy got his first taste of politics at age six after riding his tricycle into the Governor’s office. Twenty-eight years later he became the first Democrat and youngest person ever elected to the United States Senate from Vermont. He writes movingly of his wife of nearly sixty years, Marcelle, his family life, his beloved home state of Vermont, and his unexpected life as an actor with cameos in five Batman movies. Despite being born legally blind in one eye, Leahy became an accomplished photographer, shooting history as he witnessed it. His intimate portraits illustrate the book, showcasing history through the lens of his life.

Full of wisdom and insight, The Road Taken ranks among the greatest political memoirs, revealing a momentous life marked by hard decisions made without regret.
The last of Congress’s “Watergate Babies,” Patrick Leahy was elected to the United States Senate in 1974 and is currently its most senior member. Leahy was born in Montpelier, Vermont, and grew up blocks from the State House. Senator Leahy is currently the President Pro Tempore of the United States Senate and Chairman of the Senate Appropriations Committee. He served for twenty years as chair or ranking of the Senate Judiciary Committee where he remains as the most senior Democrat. He is also the most senior Democrat on the Senate Agriculture Committee where he previously served as Chair for seven years. Senator Leahy has been married to Marcelle Pomerleau Leahy since 1962. They have a daughter, two sons, and five grandchildren. The Leahys live on a tree farm in Middlesex, Vermont.
"A skillfully spun memoir that shows how politics is—or at least should be—conducted."—KIRKUS REVIEWS