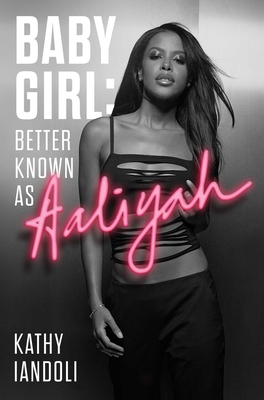 
Not On Our Shelves—Ships in 1-5 Days
In a definitive and “excellent homage to a star who left this planet too soon” (Questlove), the life, career, tragic death, and evolution of Aaliyah into a music legend are explored—featuring in-depth research and exclusive interviews.

By twenty-two years old, Aaliyah had already accomplished a staggering amount: hit records, acclaimed acting roles, and fame that was just about to cross over into superstardom. Like her song, she was already “more than a woman” but her shocking death in a plane crash prevented her from fully growing into one.

Now, two decades later, the full story of Aaliyah’s life and cultural impact is finally and lovingly revealed. Baby Girl features never-before-told stories, including studio anecdotes, personal tales, and eyewitness accounts on the events leading up to her untimely passing. Her enduring influence on today’s artists—such as Rihanna, Drake, Normani, and many more—is also celebrated, providing Aaliyah’s discography a cultural critique that is long overdue.

“There’s no better way to pay your respect to R&B’s true angel than to lose yourself in the pages” (Kim Osorio, journalist and author of Straight from the Source) of this “dazzling biography” (Publishers Weekly) that is as unforgettable as its subject.

This book was written without the participation of Aaliyah’s family/estate.
Kathy Iandoli is a critically acclaimed hip-hop journalist and author of God Save the Queens: The Essential History of Women in Hip-Hop. She’s written for numerous publications including Billboard, XXL, Teen Vogue, Vibe, The Village Voice, Rolling Stone, and many more. A professor-in-residence of music business at New York University, Kathy routinely serves as a TV and radio panelist for discussions on hip-hop and gender. She lives in the New York metropolitan area.
"There has never been a real, comprehensive story on the life of Aaliyah and her impact on music, until now. Baby Girl takes you on the journey with Aaliyah—through her ups and downs—while showing how she influenced the generations of Hip-Hop, Pop and R&B artists that followed. An excellent homage to a star who left this planet too soon."—Ahmir "Questlove" Thompson

"Aaliyah was one of the rare artists that made everyone feel like she was their sister. She felt familiar -- like family -- even though we didn't really know her story. Baby Girl changes that by shedding light on the promise and pain of someone who meant so much to the culture. After reading it, Aaliyah and her legacy mean so much more."—Robert Glasper, Grammy Award winning artist

"Baby Girl is filled with insights and details into a too short life filled with profound controversy, dynamic collaborations and iconic hits. Iandoli does a deep dive into a much discussed but too little understood life." —Nelson George, author and filmmaker

"There's no better way to pay your respect to R&B's true angel than to lose yourself in the pages of Kathy Iandoli's Baby Girl. Aaliyah's tragic ending has so often been documented, but this book breathes new life into her story. It's a deep dive into her person, her music and the resolution for anyone who has questions about her impact." —Kim Osorio, Hip Hop Journalist

“Iandoli dutifully honors the life and the indelible imprint and influence Aaliyah left on the music industry. A fond tribute to the enduring legacy of R&B’s greatly missed 'Queen of Urban Pop.'” –Kirkus Reviews

"The short yet remarkable life of 'R&B princess' Aaliyah is paid a moving tribute in this dazzling biography....Weaving together exclusive interviews and in-depth research, Iandoli succeeds in vividly capturing the artist whose work became a 'fantastical silhouette that hangs over music.'" —Publishers Weekly

"[T]his book is written for all readers: fans will cherish it, and those who haven’t heard of Aaliyah will be fans by the end of it." —Booklist