Corruptible: Who Gets Power and How It Changes Us (Paperback) 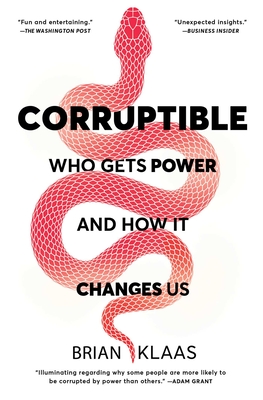 Corruptible: Who Gets Power and How It Changes Us (Paperback)


In Stock—Click for Locations
An “absorbing, provocative, and far-reaching” (Kirkus Reviews, starred review) look at what power is, who gets it, and what happens when they do, based on over 500 interviews with those who (temporarily, at least) have had the upper hand—from the creator of the Power Corrupts podcast and Washington Post columnist Brian Klaas.

Does power corrupt, or are corrupt people drawn to power? Are tyrants made or born? Are entrepreneurs who embezzle and cops who kill the result of poorly designed systems or are they just bad people? If you were suddenly thrust into a position of power, would you be able to resist the temptation to line your pockets or seek revenge against your enemies?

To answer these questions, Corruptible draws on over 500 interviews with some of the world’s top leaders—from the noblest to the dirtiest—including presidents and philanthropists as well as rebels, cultists, and dictators. Some of the fascinating insights include: how facial appearance determines who we pick as leaders, why narcissists make more money, why some people don’t want power at all and others are drawn to it out of a psychopathic impulse, and why being the “beta” (second in command) may actually be the optimal place for health and well-being.

Corruptible also features a wealth of counterintuitive examples from history and social science: you’ll meet the worst bioterrorist in American history, hit the slopes with a ski instructor who once ruled Iraq, and learn why the inability of chimpanzees to play baseball is central to the development of human hierarchies.

Based on deep, unprecedented research from around the world, and filled with “unexpected insights…the most important lesson of Corruptible is that when psychopaths inadvertently reveal their true selves, the institutions that they plague must take action that is swift, brutal, and merciless” (Business Insider).
Brian Klaas grew up in Minnesota, earned his DPhil at Oxford, and is now a professor of global politics at University College London. He is also a weekly columnist for The Washington Post, host of the award-winning Power Corrupts podcast, and frequent guest on national television. Klaas has conducted field research across the globe, interviewing despots, CEOs, torture victims, dissidents, cult leaders, criminals, and everyday power abusers. He has also advised major politicians and organizations including NATO, the European Union, and Amnesty International. You can find him at BrianPKlaas.com and on Twitter @BrianKlaas.
A Kirkus Reviews Best Book of 2021

“FUN AND ENTERTAINING…With a deft literary hand, Klaas describes how positions that offer power and possibilities for enrichment feature incentives that attract the wrong sort of people.”
—Washington Post

“COMPELLING... [A] useful framework [for] recognizing that while difficult to change, human behavior can be steered in better directions.”
—Washington Monthly

“UNEXPECTED INSIGHTS…presented in a digestible and accessible way…Maybe the most important lesson of Corruptible is that when psychopaths inadvertently reveal their true selves, the institutions that they plague must take action that is swift, brutal and merciless.”
—Business Insider

“FAST-PACED…Klaas is an entertaining guide who has read widely across different fields and is able to connect his findings insightfully and judiciously.”
—Times Literary Supplement

“ENRICHED BY COLORFUL CASE STUDIES AND LUCID EXPLANATIONS... a nuanced and entertaining guide to the meaning and function of power.”
—Publishers Weekly

“ILLUMINATING…reveals why some people and systems are more likely to be corrupted by power than others."
—Adam Grant, #1 New York Times bestselling author of Think Again

“A NEW, INSIGHTFUL, AND SEDITIOUS ROADMAP TO THE PRIMAL URGE TO DOMINATE… Dangerous as a drug addiction, power changes both those who have it and those who just want a quick fix.”
—Richard Engel, Chief Foreign Correspondent of NBC News

"AN EXTRAORDINARY INTERROGATION OF THE WORKINGS OF POWER... A critical book for these troubling times. A must read!"
—Eddie S. Glaude Jr., James S. McDonnell Distinguished University Professor at Princeton University

"ENGROSSING, THOUGHT-PROVOKING, AND FUNNY... an important exploration of how ordinary people can keep leadership out of the hands of monsters."
—Heather Cox Richardson, author of How the South Won the Civil War and the newsletter "Letters from an American"

"THE FREAKONOMICS OF POLITICAL SCIENCE... With revelations that reach from global politics to how your company is managed, this is a perceptive and, above all, entertaining read."
—Max Boot, Washington Post columnist and senior fellow at the Council on Foreign Relations

“PASSIONATE, INSIGHTFUL, AND OCCASIONLLY JAW-DROPPING…Corruptible sets out the story of the intoxicating lure of power—and how it has shaped the modern world.”
—Peter Frankopan, internationally bestselling author of The Silk Roads: A New History of the World

"RICH INSIGHTS AND FASCINATING OBSERVATIONS... Shines a light on recent efforts to ensure that the corrupt don't get power, and the incorruptible do."
—Richard Stengel, former managing editor of Time magazine and author of Information Wars

“A MAGNIFICENT BOOK THAT IS AS RIVETING AS A CRIME STORY… Klaas merges insights from evolutionary science, a wealth of recent social psychology research, and personal interviews with the powerful (and corrupt).”
—Peter Turchin, author of Ultrasociety: How 10,000 Years of War Made Humans the Greatest Cooperators on Earth

“A GPS SYSTEM FOR NAVIGATING A WORLD INCREASINGLY FULL OF ILLIBERAL DEMOCRACIES, MODERNIZED DICTATORSHIPS, AND POPULISTS WHO CARE ONLY FOR POWER…The power-hungry don’t ask why, they only ask why not.”
—Garry Kasparov, Chairman of both the Renew Democracy Initiative and the Human Rights Foundation, and, formerly, world chess champion

“A BRILLIANT EXPLORATION…This book builds Brian Klaas’ reputation, offering an essential guide through our world of democratic decay, corruption, and cronyism.”
—Dan Snow, bestselling author of On This Day in History

"Essential. A brilliant study of the nature of power, explaining just why it so often renders those who hold it evil."