A Man of Iron: The Turbulent Life and Improbable Presidency of Grover Cleveland (Hardcover) 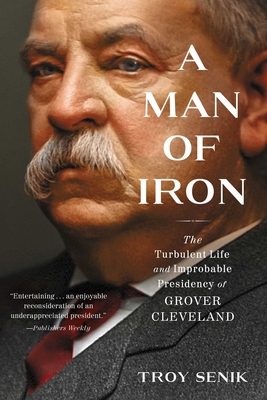 A Man of Iron: The Turbulent Life and Improbable Presidency of Grover Cleveland (Hardcover)


On Our Shelves Now at:
Named a Best Book of 2022 by The Christian Science Monitor

A long-overdue biography of Grover Cleveland—the honest, principled, and plain-spoken president whose country has largely overlooked him.

Featuring a wealth of in-depth research and newly uncovered details, A Man of Iron explores the remarkable life and extraordinary career of Grover Cleveland—one of America’s most unusual presidents and the only one to serve two non-consecutive terms.

Grover Cleveland’s political career—a dizzying journey that saw him rise from obscure lawyer to president of the United States in just three years—was marked by contradictions. A politician of uncharacteristic honesty and principle, he was nevertheless dogged by secrets from his personal life. A believer in limited government, he pushed presidential power to its limits to combat a crippling depression, suppress labor unrest, and resist the forces of American imperialism. A headstrong executive who alienated Congress, political bosses, and even his own party, his stubbornness nevertheless became the key to his political appeal. The most successful Democratic politician of his era, he came to be remembered most fondly by Republicans.

A fascinating look at a unique man presiding over a transformational era, A Man of Iron is a compelling and vivid biography joining the ranks of presidential classics such as David McCullough’s John Adams, Ron Chernow’s Grant, and Amity Shlaes’s Coolidge.
Troy Senik is an author and former White House speechwriter whose writing has appeared in outlets such as The Wall Street Journal, Los Angeles Times, City Journal, and more. A former think tank executive, he is the cofounder of Kite & Key, a digital media company focused on public policy.
“Entertaining…an enjoyable reconsideration of an underappreciated president.” —Publishers Weekly

“Robust biography of an overlooked president...a capably written introduction to a political leader who, though no rock star, deserves to be better known.” —Kirkus

"A Man of Iron is a tribute to an incorruptble man, a rare politician who rose above partisanship." —Roger Lowenstein, Wall Street Journal

“A Man of Iron is better than [previous Cleveland biographies] — smarter, more comprehensive, faster-paced, and above all funnier in exactly the kind of sly, underhanded way that best fits its subject.” —Christian Science Monitor

“A Man of Iron is a thoroughly engaging and enjoyable journey through the life and career of the ox-like man who became the only U.S. president to serve two nonconsecutive terms.” —National Review

"A great read!" —Peter Baker, journalist at The New York Times, via Twitter

"Grover Cleveland was one of the more remarkable presidents in U.S. history, but today he is scarcely remembered, despite being one of a few men to win the popular vote three times. In a new biography, author Troy Senik seeks to remind Americans of his life and work and to explain why Cleveland has largely vanished from the memory of the nation he served." —Responsible Statescraft

"A Man of Iron finds the perfect balance between gifty histories and doorstop biographies... Senik packs in many dense discussions of the annexation of Hawaii, the gold standard, Cleveland’s fraught relationship with Buffalo, and violent labor struggles. Also exemplary is A Man of Iron’s aphoristic style. Senik sprinkles throughout many insightful reflections of his own..." —City Journal

"Senik...fills A Man of Iron with prodigious research, rich detail on his subject’s public and private lives, and lively prose as he profiles the man likely to have been the last conservative Democrat to hold the presidency." —The Free Lance-Star