There She Was: The Secret History of Miss America (Hardcover) 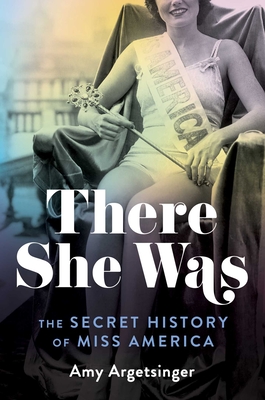 There She Was: The Secret History of Miss America (Hardcover)


In Stock—Click for Locations
“Argetsinger...is a true pageant enthusiast; she brings empathy and respect to the women who have followed this path.” —The Washington Post

A Washington Post Style editor’s fascinating and irresistible look back on the Miss America pageant as it approaches its 100th anniversary.

The sash. The tears. The glittering crown. And of course, that soaring song. For all of its pomp and kitsch, the Miss America pageant is indelibly written into the American story of the past century. From its giddy origins as a summer’s-end tourist draw in Prohibition-era Atlantic City, it blossomed into a televised extravaganza that drew tens of millions of viewers in its heyday and was once considered the highest honor that a young woman could achieve.

For two years, Washington Post reporter and editor Amy Argetsinger visited pageants and interviewed former winners and contestants to unveil the hidden world of this iconic institution. There She Was spotlights how the pageant survived decades of social and cultural change, collided with a women’s liberation movement that sought to abolish it, and redefined itself alongside evolving ideas about feminism.

For its superstars—Phyllis George, Vanessa Williams, Gretchen Carlson—and for those who never became household names, Miss America was a platform for women to exercise their ambitions and learn brutal lessons about the culture of fame. Spirited and revelatory, There She Was charts the evolution of the American woman, from the Miss America catapulted into advocacy after she was exposed as a survivor of domestic violence to the one who used her crown to launch a congressional campaign; from a 1930s winner who ran away on the night of her crowning to a present-day rock guitarist carving out her place in this world. Argetsinger dissects the scandals and financial turmoil that have repeatedly threatened to kill the pageant—and highlights the unexpected sisterhood of Miss Americas fighting to keep it alive.
Amy Argetsinger is an editor for The Washington Post’s style section. A staff writer since 1995, she covered a variety of news beats and went on to write the Reliable Source column for eight years. She lives in Washington, DC, with her husband and daughter. You can follow her on Twitter @AmyArgetsinger.
"In this wildly entertaining journey into an American institution we see how beauty is quantified and calibrated. Surprisingly, some of the biggest disrupters, the people who want the crown to be about more than superficial beauty, are at the very heart of the country's most celebrated beauty pageant. I couldn't put this book down."
—Kate Andersen Brower, CNN contributor and #1 New York Times bestselling author of The Residence, First Women and Team of Five

"Assiduously researched and beautifully written, There She Was explores the pageant's history, its small-town roots and its glamorous allure with engaging reporting, wry humor and affection. In Argetsinger's capable hands, this is ultimately the story of women in this country."
—Robin Givhan, Pulitzer Prizewinning critic, Washington Post senior critic-at-large, and author of The Battle of Versailles

"Amy Argetsinger's There She Was: The Secret History of Miss America is a perfect marriage of author to subject. With a gimlet eye that has always marked her best work for the Washington Post, Argetsinger explores this 'crazy, lofty, dusty title' with energy and compassion. A sardonic and delightful book"
—Jonathan Coleman, New York Times bestselling author of Long Way to Go

“Absorbing...a timetravelly journey...There She Was delves into the pageant's many scandals and identity crises, its toxic culture and racist history...[and] swings through the glory boomer years of Phyllis George and on to the Vanessa Williams scandal and to the sad, snowy December 2019 pageant.”
—Philadelphia Inquirer

“An earnest, gossip-fueled history of the Miss America pageant. An unabashed admirer of the pageant, Argetsinger details its origins in the 1920s as a promotion to draw tourists to Atlantic City during prohibition, and lovingly skewers such beauty pageant clichés as baton-twirling (no twirler has ever won the contest) and contestants’ calls for ‘world peace.’ Profiles of well-known winners . . . add color and insight, while Argetsinger keeps careful track of how political and cultural trends have affected the contest.”
—Publishers Weekly

“[Argetsinger’s] sympathetic ear brings forth candid, conflicted testimony from an array of former and almost Miss Americas, and she emphasizes the sisterhood and support that many of the women found—often years later—among other winners...Few have done such a lively, clear-eyed job at evoking [the pageant’s] pleasures.”
—Air Mail

“[Argetsinger] looks at the pageant’s past and present, literally taking the reader backstage to meet the contestants vying for Miss Virginia (as suspenseful as any Agatha Christie plot), dissecting all the juiciest scandals, and examining the institution against the backdrop of the women’s liberation movement...It is her knack for detailing delicious drama that makes her book so much fun to read.”
—Washington Independent Review of Books