The Next Civil War: Dispatches from the American Future (Hardcover) 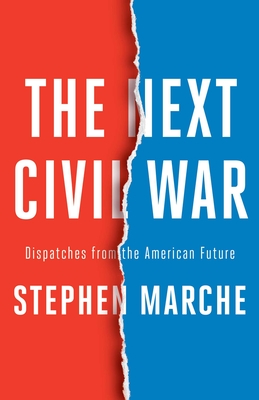 The Next Civil War: Dispatches from the American Future (Hardcover)


On Our Shelves Now at:
The United States is coming to an end. The only question is how.

“Should be required reading for anyone interested in preserving our 246-year experiment in self-government.” —The New York Times Book Review * “Well researched and eloquently presented.” —The Atlantic * “It’s not a matter of if but when: A civil war is on the way...In a time of torment, this is a book well worth reading.” —Kirkus Reviews

In this deeply researched work of speculative nonfiction that reads like Ezra Klein’s Why We’re Polarized crossed with David Wallace-Wells’s The Uninhabitable Earth, a celebrated journalist takes a fiercely divided America and imagines five chilling scenarios that lead to its collapse, based on in-depth interviews with experts of all kinds.

On a small two-lane bridge in a rural county that loathes the federal government, the US Army uses lethal force to end a standoff with hard-right anti-government patriots. Inside an ordinary diner, a disaffected young man with a handgun takes aim at the American president stepping in for an impromptu photo-op, and a bullet splits the hyper-partisan country into violently opposed mourners and revelers. In New York City, a Category 2 hurricane plunges entire neighborhoods underwater and creates millions of refugees overnight—a blow that comes on the heels of a financial crash and years of catastrophic droughts— and tips America over the edge into ruin.

These nightmarish scenarios are just three of the five possibilities most likely to spark devastating chaos in the United States that are brought to life in The Next Civil War, a chilling and deeply researched work of speculative nonfiction. Drawing upon sophisticated predictive models and nearly two hundred interviews with experts—civil war scholars, military leaders, law enforcement officials, secret service agents, agricultural specialists, environmentalists, war historians, and political scientists—journalist Stephen Marche predicts the terrifying future collapse that so many of us do not want to see unfolding in front of our eyes. Marche has spoken with soldiers and counterinsurgency experts about what it would take to control the population of the United States, and the battle plans for the next civil war have already been drawn up. Not by novelists, but by colonels.

No matter your political leaning, most of us can sense that America is barreling toward catastrophe—of one kind or another. Relevant and revelatory, The Next Civil War plainly breaks down the looming threats to America and is a must-read for anyone concerned about the future of its people, its land, and its government.
Stephen Marche is a novelist and culture writer who has written for The Atlantic, The New York Times, The Wall Street Journal, The New Yorker, Esquire, and many other outlets. His books include three novels, The Hunger of the Wolf, Raymond and Hannah, and Shining at the Bottom of the Sea, as well as The Unmade Bed and How Shakespeare Changed Everything. He lives in Toronto with his wife and children.
“Well researched and eloquently presented.”
—The Atlantic

“Should be required reading for anyone invested in preserving our 246-year experiment in self-government . . . The book alternates between fictional dispatches from a coming social breakdown and digressions that support its predictions with evidence from the present. The effect is twofold: The narrative delivers Cormac McCarthy-worthy drama; while the nonfictional asides imbue that drama with the authority of documentary.”
—Ian Bassin, The New York Times Book Review

“Richly imagined . . . Marche is poignantly aware of the degree to which global liberty rides on what happens to America.”
—Financial Times

“Too many of his pronouncements ring true.”
—New Yorker

“It’s not a matter of if but when: A civil war is on the way. . . . In a time of torment, this is a book well worth reading.”
—Kirkus Reviews