Politics Is for Power: How to Move Beyond Political Hobbyism, Take Action, and Make Real Change (Paperback) 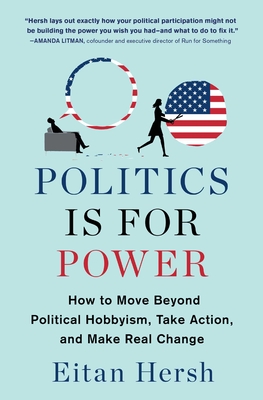 Politics Is for Power: How to Move Beyond Political Hobbyism, Take Action, and Make Real Change (Paperback)


On Our Shelves Now at:
A groundbreaking analysis of political hobbyism—treating politics like a spectator sport—and an urgent and timely call to arms for the many well-meaning, well-informed citizens who follow political news, but do not take political action.

Do you consider yourself politically engaged? Probably, yes! But are you, really? The uncomfortable truth is that most of us have good intentions. We vote (sometimes) and occasionally sign a petition or attend a rally. But we mainly “engage” by consuming politics as if it’s entertainment or a hobby. We obsessively follow the news and complain about the opposition to our friends or spouse. We tweet and post and share. The hours we spend on politics are used mainly as pastime.

Instead, political scientist and data analyst Eitan Hersh offers convincing evidence that we should be spending the same number of hours building political organizations, implementing a long-term vision for our local communities, and getting to know our neighbors, whose votes will be needed for solving hard problems. We could be accumulating power so that when there are opportunities to make a difference—to lobby, to advocate, to mobilize—we will be ready. Aided by cutting-edge social science as well as remarkable stories of ordinary citizens who got off their couches and took political power seriously, this book shows us how to channel our energy away from political hobbyism and toward empowering our values.

In an age of political turmoil and as the 2020 election looms, Politics Is for Power is an inspiring, vital read that will make you hopeful for America’s democratic future.
Eitan Hersh received a PhD from Harvard University in 2011. He served for six years on the faculty of Yale University as assistant professor of political science and resident fellow of the Institution for Social and Policy Studies before becoming a tenured associate professor of political science at Tufts University. His peer-reviewed articles have been published in the major political science journals. Hersh is the author of Hacking the Electorate and Politics Is for Power.
“In our age of democratic turmoil, citizens often ask: What can I do? Where can I have an impact? Frustratingly, analysts usually have few answers to these important questions. Eitan Hersh does. His careful analysis and moving stories show us where and how citizens have made a difference and why so many don’t. Along the way, he will leave you inspired, and even hopeful, about America’s democratic future.” —Daniel Ziblatt, professor of government, Harvard University, and coauthor of How Democracies Die

“Politics is not a spectator sport nor a game, in spite of how Twitter can sometimes make it feel. With rigorous research and compelling stories, Hersh lays out exactly how your political participation might not be building the power you wish you had—and what to do to fix it. (Hint: Get involved locally. Consider a run for something!)” —Amanda Litman, cofounder and executive director of Run for Something

“At a moment when most people are wringing their hands over the decline of democracy, Politics Is for Power offers a fresh, evidence-based look at both the problem and the solutions. Instead of looking to the outside for saviors, the book turns the mirror on all of us to show what we might be doing to destroy democracy and what we can be doing instead to renew it. It’s a vital read for anyone who feels like there must be something more we can do.” —Hahrie Han, inaugural director of the SNF Agora Institute and professor of political science, Johns Hopkins University