The War That Made the Roman Empire: Antony, Cleopatra, and Octavian at Actium (Hardcover) 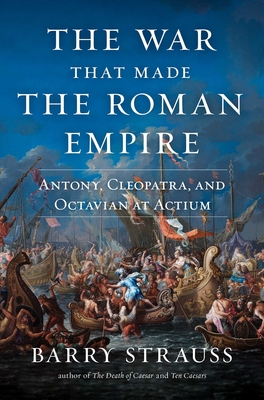 The War That Made the Roman Empire: Antony, Cleopatra, and Octavian at Actium (Hardcover)


On Our Shelves Now at:
A “splendid” (The Wall Street Journal) account of one of history’s most important and yet little-known wars, the campaign culminating in the Battle of Actium in 31 BC, whose outcome determined the future of the Roman Empire.

Following Caesar’s assassination and Mark Antony’s defeat of the conspirators who killed Caesar, two powerful men remained in Rome—Antony and Caesar’s chosen heir, young Octavian, the future Augustus. When Antony fell in love with the most powerful woman in the world, Egypt’s ruler Cleopatra, and thwarted Octavian’s ambition to rule the empire, another civil war broke out. In 31 BC one of the largest naval battles in the ancient world took place—more than 600 ships, almost 200,000 men, and one woman—the Battle of Actium. Octavian prevailed over Antony and Cleopatra, who subsequently killed themselves.

The Battle of Actium had great consequences for the empire. Had Antony and Cleopatra won, the empire’s capital might have moved from Rome to Alexandria, Cleopatra’s capital, and Latin might have become the empire’s second language after Greek, which was spoken throughout the eastern Mediterranean, including Egypt.

In this “superbly recounted” (The National Review) history, Barry Strauss, ancient history authority, describes this consequential battle with the drama and expertise that it deserves. The War That Made the Roman Empire is essential history that features three of the greatest figures of the ancient world.
Barry Strauss is a professor of history and classics at Cornell University, The Corliss Page Dean Fellow at the Hoover Institution, and a leading expert on ancient military history. He has written or edited several books, including The Battle of Salamis, The Trojan War, The Spartacus War, Masters of Command, The Death of Caesar, and Ten Caesars. Visit BarryStrauss.com.
“Actium was one of the most important battles in history, and Barry Strauss brings this stunning maritime collision vividly to life.”
— Admiral James Stavridis, USN (Ret) 16th Supreme Allied Commander at NATO and author of Sea Power: The History and Geopolitics of the World's Oceans

"The victory at Actium, Mr. Strauss argues in this splendid book, allowed Augustus to build an empire that lasted for nearly 500 years. The price was the destruction of the man who dared to oppose him, along with the woman for whom he had
risked everything."
— Arthur Herman

"Barry Strauss has the rare ability of being able to bring ancient history to life in a way that is both profoundly learned and highly readable. . . . [Although ] most readers will know the outcome of one of history’s most famous battles, Strauss somehow manages to maintain the suspense and tension until its end. . . . Superbly recounted."
— Andrew Roberts

"A master historian of the ancient world’s wars turns his attention to the battle that laid the foundations for the Roman Empire. . . . Few historians can bring such a battle alive better than Strauss. . . . It must now be considered the most up-to-date history of its subject."
— Kirkus Reviews

"A grandiose love affair, doomed lovers, a trio of titanic rivals, deadly political intrigue, culminating in a seismic battle at sea—historian Barry Strauss is the perfect narrator for this epic episode in ancient empire-building."
— Adrienne Mayor, author of Gods and Robots: Myths, Machines, and Ancient Dreams of Technology

"A gripping account of the war for control of the Roman Empire. . . . [Strauss] has an eye for telling details and a knack for explaining the era’s complex political alliances and rivalries in clear terms. Ancient history buffs will be riveted."
— Publishers Weekly

"Barry Strauss pulls off the historian’s hat trick with his new book, The War That Made the Roman Empire. One, he tells the amazing true story as it truly happened; two, he brings the true historical characters vividly to life; and three, he puts it all within the Big Picture and tells us what it means.  You feel as if you’re present at the events as they unfold, yet at the same time you’re getting the global contour and context of this drama as it affects, and has affected, our own time.  The War That Made the Roman Empire is Strauss at the top of his game."
— Steven Pressfield, bestselling author of Gates of Fire and A Man at Arms

“Barry Strauss has picked up on another crucial turning point in the ancient world and expertly leads us through the twists and turns—on and off the battlefield—of this epic struggle between worlds and would-be rulers of all. A delightful read.”
— Michael Scott, Director of the Institute of Engagement; Professor of Classics and Ancient History, University of Warwick