The Art of Her Deal: The Untold Story of Melania Trump (Hardcover) 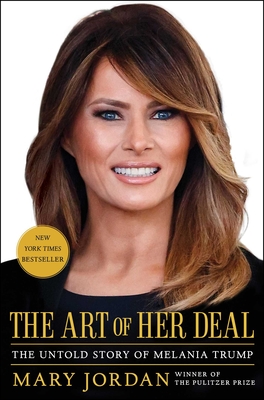 The Art of Her Deal: The Untold Story of Melania Trump (Hardcover)


Special Order—Subject to Availability
This revelatory biography of Melania Trump from Pulitzer Prize–winning Washington Post reporter Mary Jordan “deftly, and without agenda, decodes Melania [Trump]” (NBC News) who is far more influential in the White House than most people realize.

Based on interviews with more than one hundred people in five countries, The Art of Her Deal: The Untold Story of Melania Trump draws an unprecedented portrait of the first lady. While her public image is of an aloof woman floating above the political gamesmanship of Washington, behind the scenes Melania Trump is not only part of President Trump’s inner circle, but for some key decisions she has been his single most influential adviser.

Throughout her public life, Melania Trump has purposefully worked to remain mysterious. With the help of key people speaking publicly for the first time and never-before-seen documents and tapes, The Art of Her Deal looks beyond the surface image to find a determined immigrant and the life she had before she met Donald Trump. Mary Jordan traces Melania’s journey from Slovenia, where her family stood out for their nonconformity, to her days as a fledgling model known for steering clear of the industry’s hard-partying scene, to a tiny living space in Manhattan she shared platonically with a male photographer, to the long, complicated dating dance that finally resulted in her marriage to Trump. Jordan documents Melania’s key role in Trump’s political life before and at the White House, and shows why he trusts her instincts above all.

The picture of Melania Trump that emerges in The Art of Her Deal is one of a woman who is savvy, steely, ambitious, deliberate, and who plays the long game. And while it is her husband who became famous for the phrase “the art of the deal,” it is she who has consistently used her leverage to get exactly what she wants. This is the story of the art of her deal.
Mary Jordan is a Pulitzer Prize–winning reporter for The Washington Post and a bestselling author. Her book, Trump on Trial, coauthored with her husband and Washington Post colleague Kevin Sullivan, features reporting from dozens of Washington Post journalists, and traces the investigation, acquittal, and aftermath of the impeachment of Donald Trump. Jordan’s New York Times bestselling book, The Art of Her Deal, an unauthorized biography of Melania Trump, was published in June 2020. Jordan and Sullivan are also authors of the #1 New York Times bestseller, Hope: A Memoir of Survival in Cleveland, the story of Amanda Berry and Gina DeJesus, who were kidnapped in Cleveland and held for a decade. They previously wrote The Prison Angel: Mother Antonia’s Journey from Beverly Hills to a Life of Service in a Mexican Jail. They were the Washington Post’s co-bureau chiefs in Tokyo, Mexico City, and London for fourteen years.
"Well-reported...[Jordan] brings new information about this unconventional first lady to the surface."
— New York Times

"An extraordinary work of discovery and empathy...The Art of Her Deal is beyond all doubt an extraordinary book. It is impeccably reported and written — light, clear, engaging and honest throughout."
— Salon

"Far from the helpless stereotype that has become a running punchline, Jordan’s research reveals something larger: the personality and strategy required to become a successful despot’s wife. ... Jordan deftly, and without an agenda, decodes Melania."
— NBC News

"Impressively reported... Mary Jordan has pulled back the veil. It reveals the first lady to be a power player in her own right, one driven by a very clear sense of her own self-interest."
— Karen Tumulty, The Washington Post

"[THE ART OF HER DEAL] adds depth to the prevailing portrait of Melania as merely an 'elegant accessory' to her husband."
— Publishers Weekly

"A new, scrupulously reported biography by Washington Post reporter Mary Jordan... [argues] that the first lady is not a pawn but a player... and a woman able to get what she wants from one of the most powerful and transparently vain men in the world ... The result is a convincing case that those 'who dismiss her as nothing more than an accessory do not understand her or her influence.'"
— NPR

"Jordan diligently assembles the facts on the Access Hollywood scandal, the Stormy Daniels affair, the plagiarized convention speech, and the bizarre jacket at the border, among other events. The author’s presentation often achieves the simple elegance her subject aspires to. Interesting and fair—as complete a portrait as we can expect of the current first lady."
— Kirkus Reviews