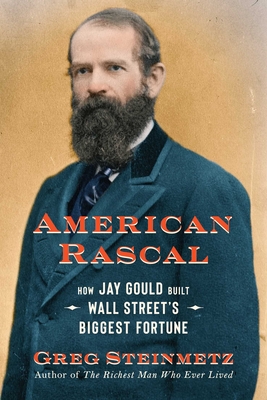 
On Our Shelves Now at:
The gripping biography of Jay Gould, the greatest 19th-century robber barons, whose brilliance, greed, and bare-knuckled tactics made him richer than Rockefeller and led Wall Street to institute its first financial reforms.

Had Jay Gould put his name on a university or concert hall, he would undoubtedly have been a household name today. The son of a poor farmer whose early life was marked by tragedy, Gould saw money as the means to give his family a better life…even if, to do so, he had to pull a fast one on everyone else. After entering Wall Street at the age of twenty-four, he quickly became notorious when he paralyzed the economy and nearly toppled President Ulysses S. Grant in the Black Friday market collapse of 1869 in an attempt to corner the market on gold—an event that remains among the darkest days in Wall Street history. Through clever financial maneuvers, he gained control over one of every six miles of the country’s rapidly expanding network for railroad tracks—coming close to creating the first truly transcontinental railroad and making himself one of the richest men in America.

American Rascal shows Gould’s complex, quirky character. He was at once praised for his brilliance by Rockefeller and Vanderbilt and condemned for forever destroying American business values by Mark Twain. He lived a colorful life, trading jokes with Thomas Edison, figuring Thomas Nast’s best sketches, paying Boss Tweed’s bail, and commuting to work in a 200-foot yacht.

Gould thrived in an expanding, industrial economy in which authorities tolerated inside trading and stock price manipulation because they believed regulation would stifle progress. But by taking these practices to new levels, Gould showed how unbridled capitalism was, in fact, dangerous for the American economy. This eye-opening history explores Gould’s audacious exploitation of economic freedom triggered the first public demands for financial reform—a call that still resonates today.
Greg Steinmetz is a partner at a money management firm in New York. He previously worked for The Wall Street Journal, where he covered investment banking before becoming Berlin Bureau Chief and then London Bureau Chief. His first book, The Richest Man Who Ever Lived: The Life and Times of Jacob Fugger, was heralded by Andrew Ross Sorkin as one of the best reads of 2015.
"Lively, succinct, altogether admirable... [American Rascal's] fair-mindedness never dims the pleasure of a speedy narrative."— The Wall Street Journal

"Steinmetz has written a rollicking biography that brings back to life one of the most fascinating and colorful characters of 19th century American capitalism. Before George Soros, Carl Icahn and Ken Griffin, there was Jay Gould—and his tactics would have made them all blush." — John Carreyrou, New York Times bestselling author of Bad Blood

“An engaging portrait of the hidden genius of railroad magnate Jay Gould and the era of bare-knuckle capitalism he wrought... American Rascal masterfully charts Gould's remarkable rise from the backwaters of commerce to his rightful place, alongside Vanderbilt and Rockefeller, as one of the leading industrialists and financiers of America. A must-read for anyone seeking to understand how money is made— and lost.” — Anita Raghavan, author of The Billionaire's Apprentice: The Rise of the Indian-American Elite and the Fall of the Galleon Hedge Fund

"A captivating re-examination of Jay Gould, one of history's most important and infamous financial speculators, and a wildly entertaining look at Wall Street's Wild West era." – Gregory Zuckerman, special writer at The Wall Street Journal, and author of A Shot to Save the World: The Inside Story of the Life-or-Death Race for a COVID-19 Vaccine

"A gripping biography of a 19th century robber baron.” – Fortune

"Steinmetz’s fast-moving and eminently readable biography shows how Gould thrived within the context of his times but also that his greed led to necessary reforms." – BookPage

"Entertaining.. A sturdy biography of an American businessman who cared about one thing: money." – Kirkus Reviews