The Spymasters: How the CIA Directors Shape History and the Future (Paperback) 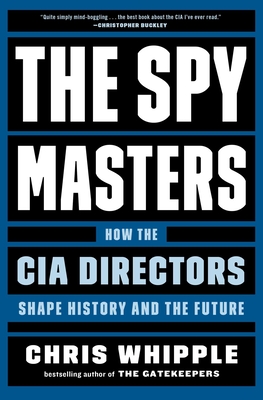 The Spymasters: How the CIA Directors Shape History and the Future (Paperback)


In Stock—Click for Locations
From the New York Times bestselling author of The Gatekeepers, an “engaging…richly textured” (The New York Times), behind-the-scenes look at what it’s like to run the world’s most powerful intelligence agency. “The best book about the CIA I’ve ever read…one hell of a story” (Christopher Buckley).

With unprecedented access to more than a dozen individuals who have made the life-and-death decisions that come with running the world’s most powerful and influential intelligence service, Chris Whipple tells the story of an agency that answers to the United States president alone, but whose activities—spying, espionage, and covert action—take place on every continent. At pivotal moments, the CIA acts as a counterforce against rogue presidents, starting in the mid-seventies with DCI Richard Helms’s refusal to conceal Richard Nixon’s criminality and through the Trump presidency when a CIA whistleblower ignited impeachment proceedings and armed insurrectionists assaulted the US Capitol.

Since its inception in 1947, the Central Intelligence Agency has been a powerful player on the world stage, operating largely in the shadows to protect American interests. For The Spymasters, Whipple conducted extensive, exclusive interviews with nearly every living CIA director, pulling back the curtain on the world’s elite spy agencies and showing how the CIA partners—or clashes—with counterparts in Britain, France, Germany, Israel, Jordan, Saudi Arabia, and Russia. Topics covered in the book include attempts by presidents to use the agency for their own ends; simmering problems in the Middle East and Asia; rogue nuclear threats; and cyberwarfare.

A revelatory, well-researched history, The Spymasters recounts seven decades of CIA activity and elicits predictions about the issues—and threats—that will engage the attention of future operatives and analysts. Including eye-opening interviews with George Tenet, John Brennan, Leon Panetta, and David Petraeus, as well as those who’ve recently departed the agency, this is a timely, essential, and important contribution to current events.
Chris Whipple is an acclaimed author, political analyst, documentary filmmaker, and speaker. He is a widely recognized authority on how the White House should be run, and is a frequent guest on MSNBC, CNN, and NPR. He has spoken at the Harvard Kennedy School and Yale’s Jackson Institute for Global Affairs. He has also contributed essays to The New York Times, The Washington Post, Los Angeles Times, and Vanity Fair. His first book, The Gatekeepers, an analysis of the position of White House Chief of Staff, was a New York Times bestseller. The Spymasters featured interviews with nearly every living CIA Director and was critically acclaimed. Chris’ most recent book, The Fight of His Life, takes us inside the Biden administration as it strives to overcome challenges larger than any that have occurred in decades. Whipple lives in New York City with his wife Cary.
New York Times Book Review Editors' Choice

“The best book about the CIA I’ve ever read.  Its revelations are eye-popping, alternately exhilarating and depressing…How Whipple managed to pull so much history together, how he extracted such a wealth of detail from his principal sources—the CIA leaders themselves—is quite simply mind-boggling.  This is an important book.  And one hell of a story.”
—Christopher Buckley, New York Times bestselling author of The White House Mess and Thank You for Smoking

“A genial, engaging portrait of the men and one woman who have run the C.I.A. over the past six decades….[Contains] a richly textured account of the operation targeting the Hezbollah leader Imad Mughniyah….In weighing success and failure, Whipple offers measured, sympathetic, on-the-one-hand-on-the-other-hand tallies of the merits and demerits for each of his spymasters.”
—The New York Times

“A study of how the C.I.A. has at different times over the decades been both a target of presidential animus and a clandestine presidential plaything….All of this can make for some great reading….Whipple’s interviews give plenty of rope for some of the former spy chiefs to hang themselves.”
—Mark Mazzetti, Washington investigative correspondent for The New York Times and author of The Way of the Knife, writing in the digital weekly Air Mail

"A page-turner. Chris Whipple gives the reader tales of intrigue and masterfully tells the history of the nation’s spymasters and their relationships to presidents, and how those interactions shaped history…..An engaging read of politics, off-the-books plots, and struggles for CIA identity and access…Rating: 3.5 out of 4 trench coats."
—The Cipher Brief

“If you’re an American, The Spymasters is required reading.”
—Chicago Review of Books

“Whipple’s access and interviews are impressive [and his] exploration of the different dynamics of the directors themselves, the presidents they served, and the challenges each faced is fascinating….[The] writing is breezy, accessible, and compelling.”
—The Diplomatic Courier

“Compelling…Chris Whipple does for the CIA and Washington DC what Plutarch did for those whose job it was to expand and defend the glory of Rome—paint an indelible portrait of how the servants of government seek to know and control the world….One theme emerges from the career of each director—how difficult it is to tell presidents anything they don’t want to hear.”
—Thomas Powers, Pulitzer Prize-winning author of The Man Who Kept the Secrets: Richard Helms and the CIA

"An expert chronicle of the CIA through the actions of its directors….This lively, opinionated history makes it clear that presidents and CIA directors sometimes deserve each other.”
—Kirkus Reviews

“Riveting…a timely reminder of the outsized influence of our nation’s intelligence bureaucracy—and the men and women who live in this wilderness of mirrors. ‘They were all asked to do things they shouldn’t do,’ says Cynthia Helms, wife of the legendary CIA Director Richard Helms. Whipple explores these ethical quandaries with nuance and fairness.”
—Kai Bird, Pulitzer Prize-winning author of The Good Spy: The Life and Death of Robert Ames

“Fascinating…Whipple parts the curtains on the dark art to show the triumphs and failures, the personalities and rivalries of those who work in the shadows of espionage.”
—Tom Brokaw, Special Correspondent for NBC News and bestselling author of The Greatest Generation

“Provides astute profiles of the men, and one woman, in charge of the modern Central Intelligence Agency, and the presidents for whom they have worked…Accurate, fair and informative.”
—John W. Dean, Nixon Administration White House Counsel and bestselling author of Conservatives Without Conscience

“Better than anyone, Chris Whipple knows how to root out the secrets buried deeply in the federal bureaucracy…When he gives the most secret of our agencies a good shaking the headline stories and secrets come tumbling out…This is the CIA with the bark off, and Washington reporting at its best.”
—Bob Schieffer, CBS News

“Engrossing…Whipple is at once clear-eyed and fair-minded while giving us a riveting read.”
—Evan Thomas, New York Times bestselling author of The Very Best Men: The Daring Early Years of the CIA

“A highly readable, fair, and well researched history of the CIA over the past fifty years. Whipple comes neither to pillory the CIA nor to praise it but, rather, to understand it—and he fully succeeds.”
—Max Boot, New York Times bestselling author The Road Not Taken: Edward Lansdale and the American Tragedy in Vietnam