A Treatise Of Nature & The Self: Surrender, Solitude & Synergy (Paperback) 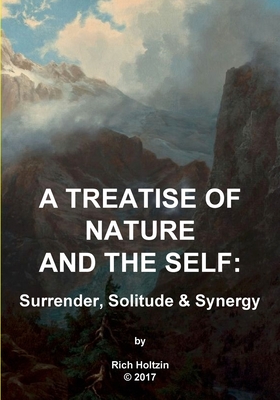 A Treatise Of Nature & The Self: Surrender, Solitude & Synergy (Paperback)

Theme: A liaison of quixotic prose and imagery portraying and personifying the Higher Self and Nature's eternal moment in transient temporality.

Synopsis: A compact compendium of prose and imagery takes the reader to another dimension of a captivating awareness with this underlying theme: What we observe also observes us Thus, a transformational subjective experience where the viewer melds with objective reality--the seen and unseen--thereby representing the temporal and eternal. Moreover, the overall composition conveys a transfiguring experience of the revered presence of the Higher Self. Describing a round-the-clock of time outing that begins in the early morning, the text's literary footslog to a lofty aerie overlooks a lucid landscape of changing color, lighting, and shadows whose expressive tableau throughout the day slowly evolves, yet seemingly a timeless experience for the mute observer-turned-witness to Nature's constantly changing munificence, moment by moment, and second by second. Eventually, the meditative watch from the aerie fades, then begins a phase of darkness. Backlit by a twinkling and a mesmerizing cosmos, after the long night's watch is over daylight returns. Consequently, the observer hikes down from the high aerie and returns home.

Given all of Nature's manifestations, the purpose of the twenty-four-hour sojourn is predicated on reflection and reverence for the pageantry of the life process. Thus, a transformational and subjective experience where, again, the witness melds with objective reality, both the seen and unseen, as well as the temporal and eternal. As for the meditative lyrics of this treatise, notably, the seven lines of each verse personify a conscious report while the ensuing three lines denote a subconscious report. A sample verse follows:

A solitary hawk flies into the ethereal vault,

Ascending ever higher into the azure dome,

Then vanishes and reappears, again and again,

It teases one to peer into that tunneling dimension

Sufficing as a discourse of eco-cosmology, the concept of this manuscript's thesis traces its origins to the import of a so-called au natural philosophy. Specifically, that other revered trinity based upon Nature, the (Higher) Self, and the Cosmos whose combined identities emanate from One Mind, yet each facet denotes different manifestations from the same source. Presented in four separate discussions (referred to as the "gateways"), each graphic verse depicts the trinity of realms as a synthesis of a single identity and source as viewed by the seer. The theme, therefore, suggests a Pantheistic philosophy, both Vedic and Western in origin, including some of the recurrent and topical ideas found in the more abstruse teachings of Ch'an (Zen) Buddhism, Taoism, and Hinduism. As a literary discourse of vivid prose, the stanzas convey and encompass the micro within the macro view. Like a camera's lens, the reader becomes the errant eye that sees and becomes that which is seen. Accordingly, the transformation of synthesis is achieved, if only for a little while.

Thanks for dropping by. For more about the author's singular life and somewhat adventurous credentials, visit his redesigned website and feel free to contact him (embedded email upper left side). He'll respond. At the near top of the page, there are also lots of videos you might want to listen to and watch.

After being Honorably Discharged from the Navy (submarine service), Rich Holtzin has lived in the West and Southwest for over four decades. Earning three academic degrees in Eastern and Western Philosophy, for some thirty years, he made a living as an outdoors educator and interpreter teaching a variety of geosciences, human, and natural history geared to the Colorado Plateau Province. Additionally, Rich was a professional studio and stage musician and taught guitar and music theory, including composing two soundtracks for the Grand Canyon and Yellowstone National Parks; a high school Educational Assistant and Substitute Teacher; a Commercial Pilot flying a variety of aircraft; a professional Photographer; a GPS surveyor and Topographical Mapper for the U. S. Forest Service; a Planetarium Control Room operator; a museum docent; and the Coconino County Sheriff's Office. What Rich is more enthused about, however, is serving in the role of an Interpretive Guide and Educator for the Grand Canyon Field Institute (a National Park Service endorsed outreach program (http: //bit.ly/1D6YS1u). He was also an instructor at Northern Arizona University and Yavapai College (respectively, Flagstaff and Prescott), as well as the owner of a Southwest eco and cultural tourism enterprise. Fairly recently, he became the Executive Director of a think tank in Albuquerque, based on astronautics and aerospace S.T.E.M. classroom projects (Science, Technology, Engineering, and Mathematics), including the co-author of a math-lab book based on rocketry (www.stemfortheclassroom). For more of RICH HOLTZIN'S backstory, peruse his website under his legal name: www.richholtzin.com He also writes books under the nom de plume, RK ALLEMAN, as published on his other Amazon Author's Page.