Freedom Through Memedom: The 31-Day Guide to Waking Up to Liberty (Paperback) 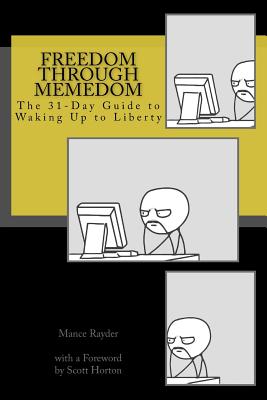 Freedom Through Memedom: The 31-Day Guide to Waking Up to Liberty (Paperback)

In his initial offering, Mance Rayder has constructed a 31-day guide that walks you through the many ways in which the government (In his case that of the United States, but it applies to most States worldwide) has designed a system to make you believe that you are free, but you are in fact, a slave to their whims. The worst part of which is that most believe that they ARE in fact a liberated people.

Mance uses the popular form of communication, the internet "meme," as a launching point to a daily lesson in which he exposes the power that WE have allowed the government to have over us.

His ultimate goal is that, at the end of 31 days, your mind will be tuned to see how the State has put you into a "free-range" pen, and that the first step to getting out of it is to recognize their deceptions at every step.

The Foreword is by Scott Horton, Director of LibertarianInstitute.org, and Editor at antiwar.com.Scott is widely considered the Libertarian authority on U.S. foreign policy. He is the author of the best seller "Fool's Errand" available on Amazon.

Mance grew up in the government controlled nightmare that is New York City. He left 2 days after graduating high school. He spent a good bit of time in South Florida where he met his wife. In 2005 they moved to the Atlanta metro area where in 2007 he discovered the Ron Paul Liberty movement. This school of thought sent him down a rabbit hole of freedom-seeking culminating in the intellectual move to Voluntaryist thought. This radically capitalist school of thought permeates his life and led him to the teachings he now shares on the podcast entitled Free Man Beyond the Wall. In keeping the majority his podcasts to under 20 minutes (interviews being the exception), Mance ensures that you can get a lot of knowledge in a short car ride, or a brief walk. More than anything he wants you to get excited and motivated about liberty. He only seeks to share knowledge that you can use in your everyday life. He has carried that idea over to his debut book, "Freedom Through Memedom." Mance can be found on Twitter at the popular account @mnrothbard, where on most days, he posts memes with the occasional commentary.