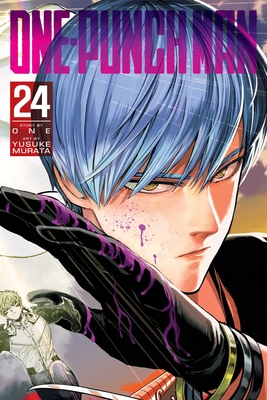 This is book number 24 in the One-Punch Man series.

The dangerous monster that can’t be cut, Evil Mineral Water, confronts Bushi Drill, Okama Itachi, and Iaian. Meanwhile, Saitama runs into the giant demonic dog Pochi, and Terrible Tornado launches into an epic supernatural battle against Gyoro-Gyoro!
Manga creator ONE began One-Punch Man as a webcomic, which quickly went viral, garnering over 10 million hits. In addition to One-Punch Man, ONE writes and draws the series Mob Psycho 100 and Makai no Ossan.