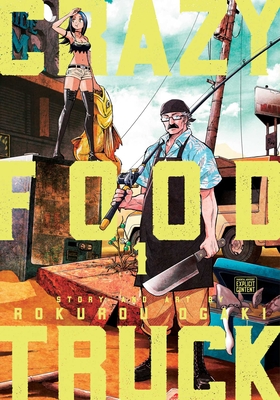 This is book number 1 in the Crazy Food Truck series.

Zero customers, a naked young lady, and an armed militia—it’s just another postapocalyptic day for this food truck owner!

The owner of a food truck in a postapocalyptic world nearly runs over a naked girl sleeping in the middle of the desert. When he gives her a lift, he inadvertently takes on her baggage too—an armed militia hot on her trail…and her even more problematic appetite. If one doesn’t take him out, the other surely will!

Gordon is a gruff, middle-aged cook running a food truck in a sand-covered wasteland. When he encounters Arisa, a naked girl sleeping in the middle of nowhere, he takes on the unintended traveling companion and her unexpected appetite. Too bad she also has unexpected baggage—an armed militia hot on her tail! Fasten your seatbelts for postapocalyptic cooking and violent mayhem on this crazy food truck road trip!
Before his 2013 debut in Shonen Sunday S with Unlimited Psychic Squad, Rokurou Ogaki worked as an assistant for manga artists Junpei Goto and Kenjiro Hata. In addition to Crazy Food Truck, he’s also the manga artist of the Akudama Drive anime’s manga adaptation. Fun fact: Rokurou Ogaki’s pen name is a reference to “rock and roll”! Rock on!