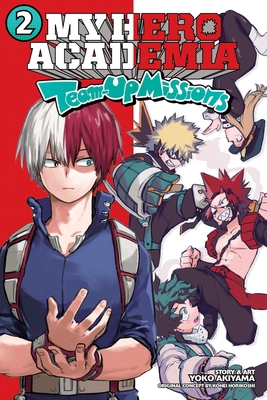 This is book number 2 in the My Hero Academia: Team-Up Missions series.

The aspiring heroes of My Hero Academia team up with pro heroes for action-packed missions!

The ambitious Team-Up Missions Program pairs groups of aspiring heroes with pro heroes to go on action-packed missions! Although Izuku Midoriya and his U.A. High friends are thrilled to participate, there’s just one catch—there’s no telling who will be teamed up with whom! From top heroes to students from other classes and schools, anyone could be on the same team.

Whether it’s Deku descending into the abyss with Tokoyami or an amusement park adventure with Todoroki, Bakugo, and others, you never know what’s next. Then, a bonus story about Deku and Bakugo’s encounter with a villain before the events of the main series!
Kohei Horikoshi was born in Aichi, Japan, in 1986. He received a Tezuka Award Honorable Mention in 2006, and after publishing several short stories in Akamaru Jump, his first serialized work in Weekly Shonen Jump was Oumagadoki Zoo in 2010. My Hero Academia is his third series in Weekly Shonen Jump.