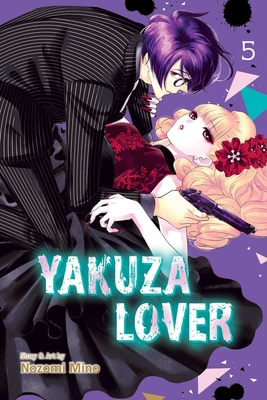 This is book number 5 in the Yakuza Lover series.

Choko, a hostess working at a club under the Oya syndicate’s protection, has her sights set on Oya. Determined to have Oya all to herself, the femme fatale arranges for Yuri to be attacked so she can play the hero and use it as an excuse to get closer to Oya. Oya discovers Choko’s plot, but it’s part of the Oya syndicate’s creed to never lay hands on a woman. So how is he going to settle the score with her?
Nozomi Mino was born on February 12 in Himeji, Hyogo Prefecture, in Japan, making her an Aquarius. She made her shojo manga debut in the May 2006 issue of Cheese! with “LOVE MANTEN” (Love Perfect Score). Since then, she has gone on to publish numerous works, including Sweet Marriage, Wagamama Otoko wa Ichizu ni Koisuru (Selfish Guys Love Hard), and LOVE x PLACE.fam. Her hobbies include going on drives and visiting cafes.