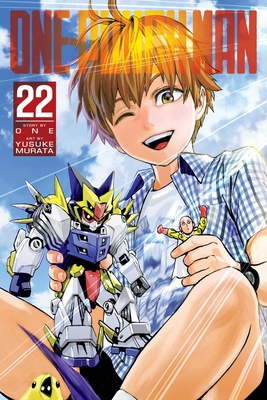 This is book number 22 in the One-Punch Man series.

Child Emperor uses his trump card, the robotic Brave Giant, to fight against the reincarnated Phoenix Man. However, his enemy easily counters this last-ditch attempt, brushing Brave Giant off as a mere toy. When Phoenix Man then evolves into an even stronger monster, Child Emperor’s conviction is shaken. Does this spell the end for the clever child hero?
Manga creator ONE began One-Punch Man as a webcomic, which quickly went viral, garnering over 10 million hits. In addition to One-Punch Man, ONE writes and draws the series Mob Psycho 100 and Makai no Ossan.