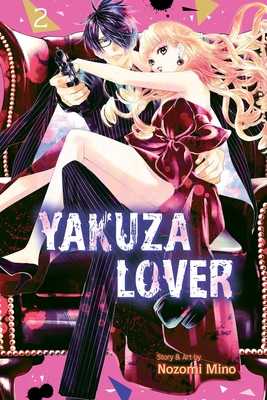 This is book number 2 in the Yakuza Lover series.

Yuri and Oya’s romantic getaway in Shanghai is cut short when sinister Russian mob boss Semilio kidnaps Yuri and tries to make her his own. But Yuri won’t be won over so easily and fights off his advances. And then Oya suddenly comes to her rescue! With Yuri finally out of harm’s way, Oya charges headfirst into battle against Semilio, leaving Yuri to wonder if he’ll make it out alive.
Nozomi Mino was born on February 12 in Himeji, Hyogo Prefecture, in Japan, making her an Aquarius. She made her shojo manga debut in the May 2006 issue of Cheese! with “LOVE MANTEN” (Love Perfect Score). Since then, she has gone on to publish numerous works, including Sweet Marriage, Wagamama Otoko wa Ichizu ni Koisuru (Selfish Guys Love Hard) and LOVE x PLACE.fam. Her hobbies include going on drives and visiting cafes.