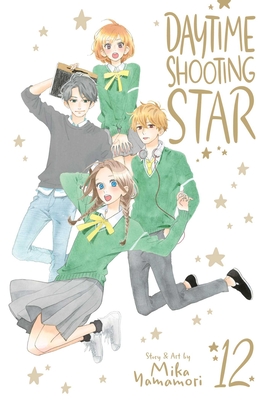 This is book number 12 in the Daytime Shooting Star series.

After arriving in Tokyo to live with her uncle, Suzume collapses in a nearby park where she had once seen a shooting star during the day. A handsome stranger brings her to her new home and tells her they’ll meet again. Suzume starts her first day at her new high school sitting next to a boy who blushes furiously at her touch. And her homeroom teacher is none other than the handsome stranger!

Suzume has moved to Tokyo and is living with her uncle. Suzume and Mamura enjoy some much-needed alone time in Okinawa. That is, until Suzume spots a guy who looks a lot like Mr. Shishio. Finally, the time has come for Suzume to confront her feelings once and for all. Who will she choose? Find out in the series’ dramatic conclusion!
Mika Yamamori is from Ishikawa Prefecture in Japan. She began her professional manga career in 2006 with “Kimi no Kuchibiru kara Mahou” (The Magic from Your Lips) in The Margaret magazine. Her other works include Sugars and Tsubaki Cho Lonely Planet.